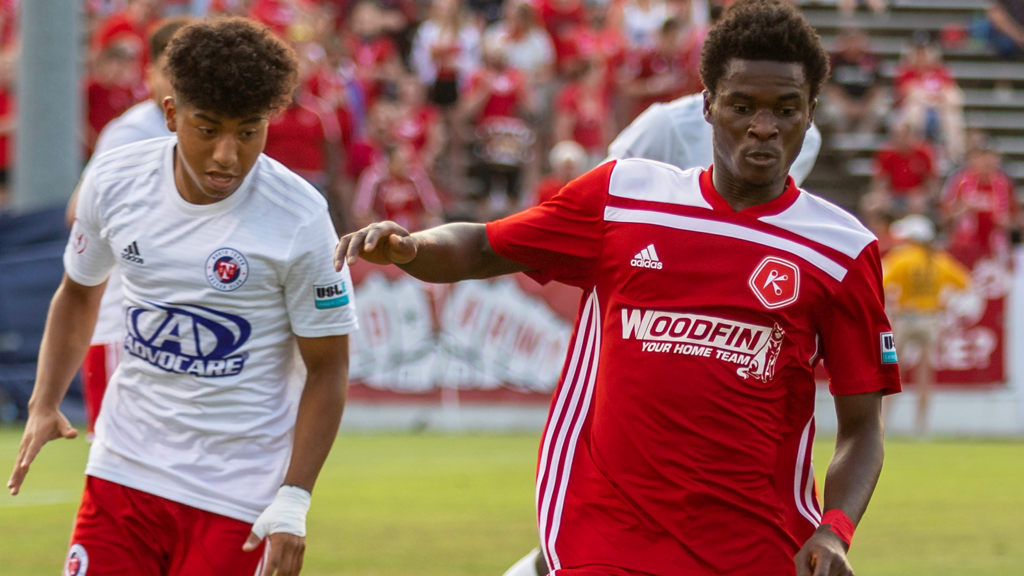 RICHMOND, Va. — (Saturday, June 1, 2019) — The Richmond Kickers (3-5-2) were defeated by the league leading North Texas SC (7-1-1) at City Stadium Saturday night. Dante Sealy gave the visitors the first half lead with a goal in the 27th minute. Second half goals from Ricardo Pepi and David Rodriguez sealed the win for North Texas in the first meeting with the two clubs.

North Texas jumped ahead in the 27th minute. Ronaldo Damus broke free on a run up the left wing. He attempted to slot the ball through for Ricardo Pepi making a run inside the Richmond box, as Josh Hughes slid in at the last second for the tackle. Damus pounced on the loose ball and looked to be going for a shot at the far post. Sealy put the ball back on frame and into the back of the net to put the visitors ahead.

Two minutes before halftime, the Kickers had a chance to pull level from a set piece. Alfusainey Jatta was called on for a tackle from behind on Charles Boateng to set up a free kick about 30 yards. Joe Gallardo stepped up and looked to curl in a shot to the near post, as his shot sailed just wide of the goal.

North Texas would make it 2-0 in the 63rd minute through the league leading goalscorer, Ricardo Pepi. Dante Sealy took the ball off the foot of Josh Hughes and chipped it ahead for Pepi. He took a touch to settle and turn to launch a shot into the back of the net.

The visitors would go ahead 3-0 in the 68th minute. Dante Sealy worked his way to the end line and cut the ball back for David Rodriguez to redirect a shot on frame and past Akira Fitzgerald.

Joe Gallardo looked for a long range effort in the 84th minute. Bringing down a ball inside the North Texas end of the pitch, Gallardo turned towards goal. He found himself in plenty of space and elected to go for goal from about 35 yards out. Carlos Avilez was ready to punch the ball away from danger.

Late into stoppage time, Akira Fitzgerald denied North Texas from a fourth goal. Tanner Tessman battled through the Kickers defense to get the ball to Ricardo Pepi at the top of the Richmond box. He took the one time shot as Fitzgerald dove to his left to make the save.

The Kickers are back on the road next Saturday night, making the cross-country trek to face FC Tucson at Kino Sports Complex. Kickoff for that match is set for 10:30 p.m. ET and will be available locally on WTVR CBS 6.3 (Comcast 206, Verizon FiOS 466) and streaming on ESPN+. Stay up to date with the Kickers on RichmondKickers.com.