Gates Open at 5:30PM for Pride Night; Kickoff at 7PM 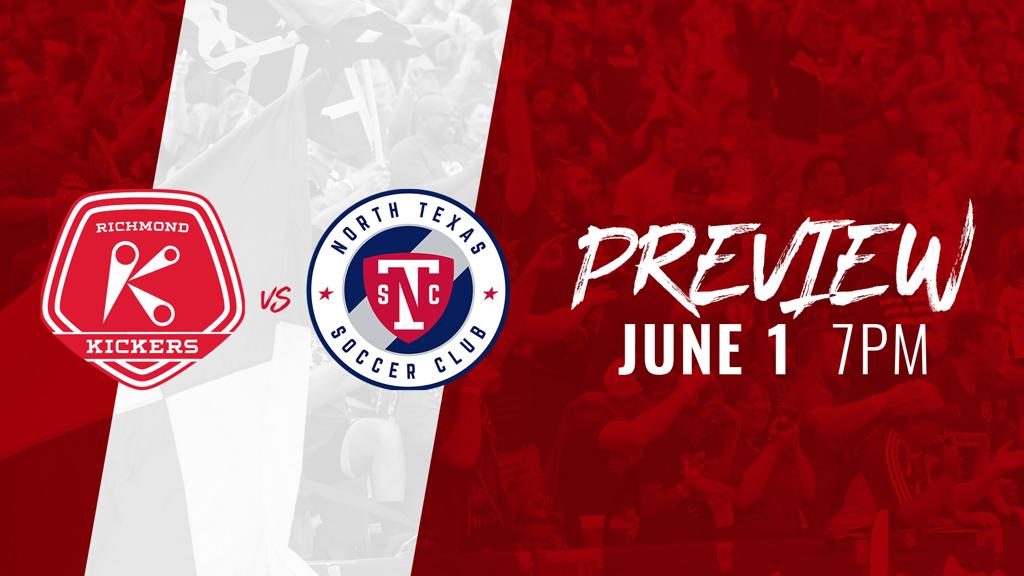 RICHMOND, Va. – (Friday, May 31, 2019) – The Richmond Kickers (3-4-2) return to City Stadium Saturday night as they play host to league leading North Texas SC (6-1-1). It’s Pride Night, presented by Health Brigade and supported by Stonewall Sports, when the gates open at 5:30 p.m. with happy hour specials on craft beer on tap for the first 30 minutes and live music from Mars River Bridge. Plus, dogs are now allowed inside City Stadium for all matches. The Kickers players will come out for warm ups wearing limited edition Pride jerseys that will be auctioned off to benefit Health Brigade. This match will be available live on WTVR CBS 6.3 (Comcast 206, Verizon FiOS 466) and streaming on ESPN+. Get tickets now at RichmondKickers.com.

This Saturday will be the first of three meetings between the Kickers and North Texas. The affiliate for FC Dallas will return just over a month later on July 13. The Kickers will make the trip out to Toyota Stadium September 10.

Richmond will be looking for their first win in four matches following a wild 2-3 road loss at Orlando City B back on May 22. Four minutes into the match, Moises Tablante put OCB up with a strike from the top of the box. Serginho would double the Orlando lead in the 27th minute. In the 35th minute, Matt Bolduc sprung Eli Lockaby on a run up the right side to score his first goal in league action. Bolduc was active again in the 80th minute, setting up Josh Hughes to level the score. Five minutes before the end of regulation, the referee pointed to the spot to award a penalty to Orlando, with Thiago Souza converting from the spot and claim all three points.

North Texas suffered their first defeat of the season Wednesday on the road at Toronto FC II, 2-3. Two first half goals from Patrick Bunk-Andersen and Matthew Srbely put the home side up heading into the first half stoppage time. Before the whistle blew to end the first half, Ronaldo Damus played the ball to Ricardo Pepi to pull a goal back. Damus leveled the score in the 56th minute. Terique Mohammed scored in the 77th minute to get the win over the league leaders.

The Kickers are back on the road next Saturday night, making the cross-country trek to face FC Tucson at Kino Sports Complex. Kickoff for that match is set for 10:30 p.m. ET and will be available locally on WTVR CBS 6.3 (Comcast 206, Verizon FiOS 466) and streaming on ESPN+. Stay up to date with the Kickers on RichmondKickers.com.

Richmond: Midfielder Matt Bolduc (#11) leads USL League One in assists with four this season, following two more assists in the last outing against Orlando City B. The Massachusetts native is in his third season with the Kickers having made eight appearances, including seven starts. Midfielder Josh Hughes (#7) scored his first professional goal in last Wednesday’s loss to OCB. Hughes has made seven appearances with the Kickers this season. Defender Eli Lockaby (#17) netted his first goal in league play in his homecoming against Orlando. The VCU product has two goals this season after scoring his first professional goal in the First Round of the 2019 Lamar Hunt U.S. Open Cup match against Virginia United.

North Texas: Forward Ricardo Pepi (#9) leads the league in scoring with six goals over five matches in the inaugural season for North Texas. Goalkeeper Carlos Avilez (#1) has three cleansheets for North Texas over six appearances. Midfielder Arturo Rodriguez (#10) has a team high three assists, playing in all eight matches for North Texas this season. All three players are products of the FC Dallas Academy.