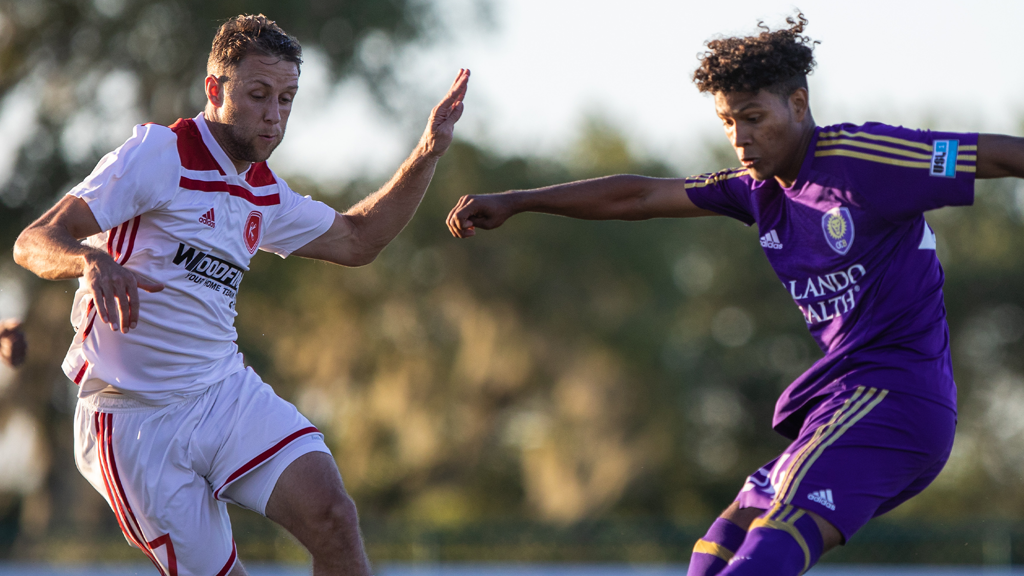 MONTVERDE, Fla. — (Wednesday, May 22, 2019) — The Richmond Kickers (3-4-2) came up short on the road against Orlando City B (2-5-2) Wednesday night at Montverde Academy. OCB struck early, taking a 1-0 lead just after four minutes by Moises Tablante. Serginho doubled the Orlando lead in the 27th minute. Eli Lockaby scored his first goal in league play in the 35th minute. Josh Hughes leveled the score in the 81st minute. A penalty in the 85th minute from Thiago Souza gave the victory to the home side.

OCB jumped ahead after just four minutes. Off a free kick on the left wing, Serghino faked the shot, electing to square a pass across the top of the Richmond box. Moises Tablante found himself with plenty of space, shooting it low and to the right of a diving Akira Fitzgerald for the opener.

Joe Gallardo looked to create an opportunity in the 20th minute. Ivan Magalhães headed the ball up field on the left flank. Gallardo picked up control of the ball and turned towards goal, beating two defenders. He tried to lay the ball off to Daniel Jackson near the penalty spot as Randy Mendoza slid in to block the pass.

Orlando doubled their lead in the 27th minute. Thiago Souza got the play going off a throw in to Rafael. He quickly turned and started a run towards goal as Ivan Magalhães tackled the ball away, unfortunately putting it right to the feet of Serginho. He just settled it and then went for the long range effort from about 30 yards out, arching it over Akira Fitzgerald.

The Kickers had a chance to get back into the match five minutes later. Conor Shanosky picked out Dennis Chin inside the center circle. He continued to move the ball up the field for Matt Bolduc. Nathan Simeon tried to tackle the ball away from Bolduc, as he got enough of a touch to get the ball in space. Joe Gallardo came crashing in and went for the shot that forced a save out of Juliano Chade.

Richmond pulled a goal back in the 35th minute through Eli Lockaby. Coming off a free kick, Ivan Magalhães played the ball short for Matt Bolduc. Noticing Lockaby making a run up the right wing, Bolduc chipped the ball over the top for Lockaby to run onto. Going one on one with the keeper, Lockaby megged him for his first goal in league action.

Dennis Chin had a chance to level the score in the 53th minute. Maxi Rodriguez sprung Chin right up the center of the pitch. Chin had a touch to bring the ball down, with a bit too much power. The OCB keeper came out to make the stop before Chin could get a shot.

Chin was active again nine minutes later. Scott Thomsen fed the ball up the field for Chin outside the Orlando box. He turned and the Jamaican put a shot on frame from about 30 yards out. Juliano Chade needed to push the shot over the goal for the save.

The Kickers kept the pressure on OCB, pushing for an equalizer in the 67th minute. Eli Lockaby shut down an Orlando attack and started to work the ball up the right flank. He quickly got the ball ahead for Matt Bolduc. Bolduc got the ball forward for Daniel Jackson near the top of the OCB box.

Orlando were awarded a penalty kick in the 84th minute. Ivan Magalhães went up to challege for the ball in the air, colliding with Thiago Souza. The referee deemed the challenge hard enough to point to the spot. Souza stepped up and converted the penalty, putting it to Akira Fitzgerald’s left side.

The Kickers get a ten day break before their next match, Saturday, June 1 at 7:00 p.m. at City Stadium when they host North Texas SC. The gates open at 5:30 p.m. for Pride Night, where the players will wear limited edition pregame pride jerseys that will be auctioned off for charity. Plus, there will be drink specials for the first 30 minutes after gates open on craft beer and live music. Tickets are on sale now at RichmondKickers.com.