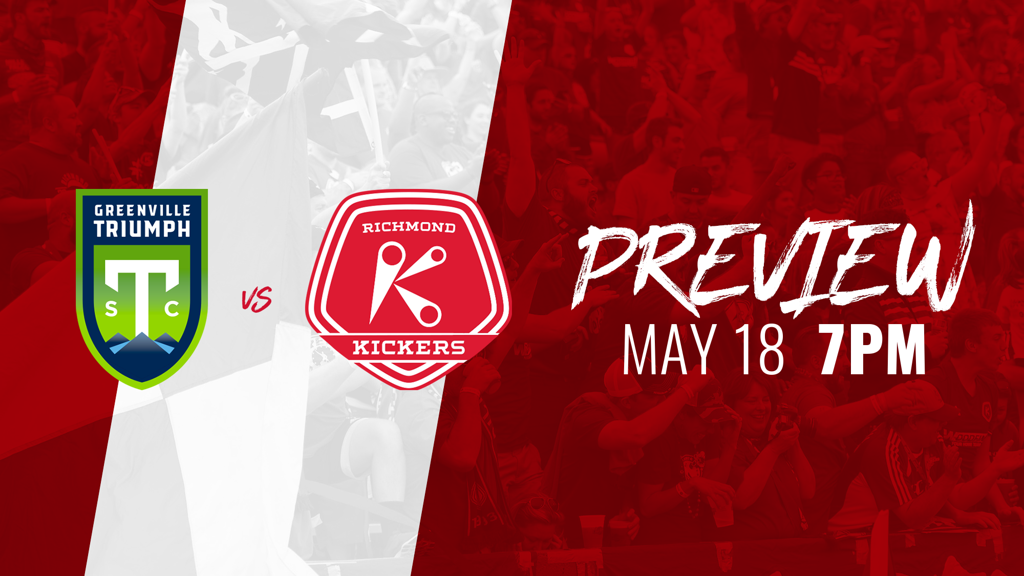 RICHMOND, Va. – (Friday, May 17, 2019) – The Richmond Kickers  return to USL League One action Saturday night, as they travel down to take on Greenville Triumph SC at Legacy Early College. Kickoff for this match is set for 7:00 p.m. and will be available on WTVR CBS 6.3 (Comcast 206, Verizon FiOS 466) and streamed online on ESPN+.

Saturday night will mark the second meeting between the two clubs, with the Kickers taking the first match. Conor Shanosky got the attack going, playing the ball ahead to Matt Bolduc inside the center circle. He found enough space to slip the ball through for Joe Gallardo. The San Diego native put together a massive solo effort, getting past five Greenville defenders and finding the back of the net in the 49th minute for the only goal of the match.

Richmond will be coming into this match on the heels of being eliminated from the 2019 Lamar Hunt U.S. Open Cup, falling 1-4 to USL Championship side North Carolina FC Wednesday night. Wahab Ackwei scored his first goal of the season in the 34th minute to level the score heading into halftime. Three second half goals from NCFC gave the home side the victory.

The Kickers last USL League One match saw them close out a four-match home stand in all competitions, earning a 2-0 win over FC Tucson last Saturday at City Stadium. Wahab Ackwei set up a run for Joe Gallardo to score his fourth goal of the season to put Richmond up 1-0 in the 83rd minute. Heading deep into stoppage time, Matt Bolduc played the ball to his right with Mutaya Mwape in space. He cut back to avoid a defender and put the ball in the back of the net for the late insurance goal.

Greenville saw a similar fate to the Kickers in the U.S. Open Cup, falling at home to the Charleston Battery, 2-1 Wednesday night. Aaron Walked connected with Max Hemmings in the 29th minute to take the lead. Charleston struck back in the 79th minute and then again in stoppage time for the USL Championship side to take the victory and move on in the tournament.

Triumph SC last saw USL League One action May 11 on the road at Lansing Ignite FC. Greenville took the lead in the 68th minute through Travis Ward, who came into the match just a minute prior. They only held on to the lead for eight minutes when Lansing were able to convert off a corner kick to tie up the match, ending in a point for both sides.

The Kickers will conclude their road trip Wednesday night as they take their first trip to Orlando City B since the 2017 season. Kickoff is set for 7:30 p.m. and will be available live on WTVR CBS 6.3 (Comcast 206, Verizon FiOS 466) as well as streaming online through ESPN+. Stay up to date on all of the Kickers news at RichmondKickers.com.

Richmond: Defender Wahab Ackwei (#18) picked up his first goal of the season Wednesday night in the U.S. Open Cup match against USL Championship side North Carolina FC. The Ghanian has made seven appearances for the club this season in league action, adding an assist. Defender Braeden Troyer (#31) is starting to find his place in the Kickers Starting XI after missing the end of the 2018 season as well as the start of the 2019 season after knee surgery. He has started both U.S. Open Cup matches, coming off the bench four times this season in USL League One matches. Forward Joe Gallardo (#10) continues to impress on the field, recently setting up Ackwei’s goal in the U.S. Open Cup match Wednesday night. Gallardo is tied for the lead in scoring for USL League One with four goals this season, including one in the first meeting with Greenville April 20.

Greenville: Forward Jake Keegan (#9) leads Triumph SC in scoring with two goals this season. Coming from a season with St. Patrick’s Athletic in Ireland, Keegan has started all seven matches for Greenville. Midfielder Carlos Gomez (#10) has played in six matches, starting two, and leads Triumph SC in assists with two this season. Gomez is in his first professional season after 54 matches at Young Harris College, scoring 32 goals over his three collegiate seasons. Goalkeeper Dallas Jaye (#22) has played every match for Greenville this season, picking up two clean sheets and making nine saves. Jaye brings in USL Championship experience for Greenville after stints with FC Cincinnati and Phoenix Rising FC, along with making 12 appearances for the Guam National Team.