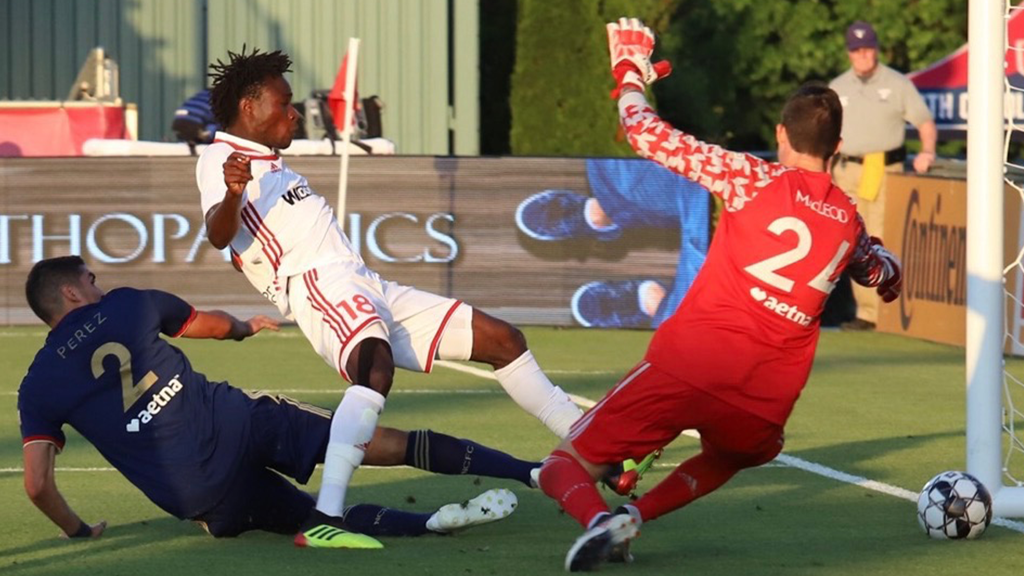 CARY, N.C. — (Wednesday, May 15, 2019) — The Richmond Kickers run in the 2019 Lamar Hunt U.S. Open Cup came to an end on the road against North Carolina FC Wednesday night. Wahab Ackwei scored his first goal of the season to draw the game level through halftime. Three second half NCFC goals downed the Kickers on the road.

Three minutes into the match and Charles Boateng nearly continued his run of form in the Open Cup. Pouncing on a loose ball, Boateng made a run at goal, sending his shot just wide to the left of the target.

Another threat came from Boateng two minutes later. Scott Thomsen played a corner short to Joe Gallardo. He continued to move the ball towards the center of the pitch to Braeden Troyer. Troyer chipped the ball in for Boateng at the near post, putting his header just to the right of goal this time.

Searching for the opener, Darrin MacLeod had enough of a touch on the ball to deny Boateng in the 7th minute. Nick Retzlaff picked up control of the ball from Matt Bolduc. Retzlaff found Boateng in position, slipping the ball through for the Ghanian. MacLeod blocked the ball enough for Caleb Duvernay to clear out of danger.

Akira Fitzgerald was called into action in the 13th minute to deal with a long range effort. Robert Kristo picked up control of the ball and found space outside of the Kickers box. He decided to go for it from about 25 yards out with Fitzgerald coming up with the easy save.

NCFC broke the deadlock in the 16th minute. Austin Panchot sent in a cross into the Richmond box, as the ball pinged around, finally falling to Ulrich Ewolo. He laid the ball off for Andre Fortune to go for the shot at the top of the box, putting it to the left of the diving Akira Fitzgerald.

Wahab Ackwei leveled the score for Richmond in the 34th minute. Matt Bolduc brought down a deflected cross, putting it right to the feet of Joe Gallardo. He took a touch and flicked the ball across the front of goal, right as Ackwei crashed the back post to put it into the back of the net.

The home side went ahead in the 52nd minute. Before the ball rolled out for a goal kick, Caleb Duvernay chipped in a cross picking out Robert Kristo at the top of the six. He leapt to beat Ackwei to the ball, heading it into the goal and past Fitzgerald.

A penalty was awarded to NCFC to get the third goal of the night in the 61st minute. Wahab Ackwei tackled Robert Kristo from behind, picking up a yellow card in the process and forcing the referee to point to the spot. Kristo stepped up to take the kick, forcing Akira Fitzgerald the wrong way.

Mutaya Mwape nearly had a chance to pull a goal back for Richmond in the 83rd minute. Joe Gallardo went down after a hard challenge from Duval Wapiwo, earning a yellow card for the tackle. Mwape stood over the free kick, and tried to sneak his shot in towards the near post, putting it wide to the right.

Another shot from Mwape in the 86th minute forced a save from Darrin MacLeod. Matt Bolduc won the ball right on the midfield line and pressed towards goal, playing the ball out to Mwape making a run up the right flank. He cut back to get around his defender and let a shot go, as MacLeod is there to make the stop.

A fourth goal for NCFC would come in the 70th minute. Manny Perez picked up control of the ball as it came loose on the right side. With space, he went for the cross low and in front goal, slipping through the pack. Yamikani Chester made a run towards the far post to pounce on the opportunity, finding the back of the net.

The Kickers get right back to USL League One play Saturday night as they travel down to face Greenville Triumph SC at Legacy Early College for a 7:00 p.m. kickoff. This match will be available to stream live on ESPN+ and shown locally on WTVR CBS 6.3 (Comcast 206, Verizon FiOS 466). Stay up to date with the Kickers at RichmondKickers.com.