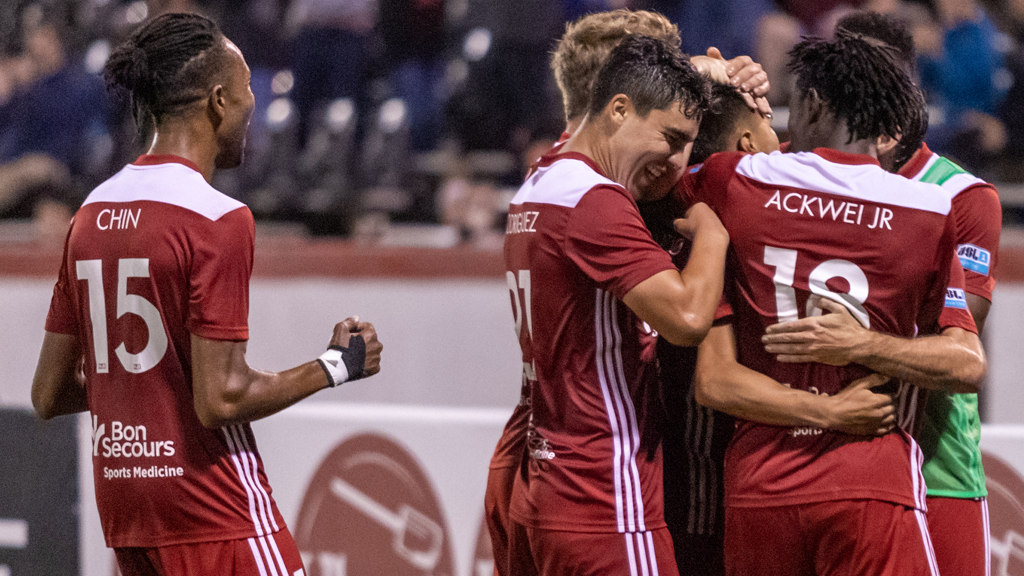 RICHMOND, Va. — (Saturday, May 11, 2019) — The Richmond Kickers (3-2-2) picked up a victory to close out their home stand, earning a 2-0 win over FC Tucson (2-3-1) Saturday night at City Stadium. Joe Gallardo scored his fourth goal of the season in the 83rd minute. Mutaya Mwape doubled the Kickers lead in stoppage time for his first goal this season. Akira Fitzgerald earned his fourth shutout of the season behind his three saves.

The first opportunity came for Richmond 12 minutes into the match. Maxi Rodriguez received the ball from Dennis Chin inside the center circle. He looked up and played the ball out wide on the left for Scott Thomsen in space. The defender whipped in a cross that forced Philip Ejimadu off his line to make the stop before a Kickers player could get a touch on it.

The woodwork kept Tucson off the scoresheet nine minutes later. Luke Hauswirth won the ball inside the Richmond box and chipped the ball up in front of goal. Devyn Jambga leapt to meet the ball, putting his header on frame and hitting it off the crossbar.

The deadlock would be broken in the 83rd minute through the Kickers leading goalscorer, Joe Gallardo. Wahab Ackwei took a touch around a defender to poke the ball loose for Gallardo. He kept his run going backwards and then quickly cut back towards the Tucson goal. Despite being surrounded by five defenders, Gallardo found the space to go for the shot from about 25 yards out, putting it just out of the reach of Philip Ejimadu for his fourth goal of the season.

The Kickers doubled their lead in stoppage time to seal the three points. Justin Grove picked up the ball in front of the Tucson bench and played the long ball ahead, up the left flank for Matt Bolduc. Before reaching the Tucson box, he found Mutaya Mwape on his right in plenty of space, squaring a pass for the Zambian. He found enough time to set up his shot on his left foot, putting it wide and out of reach of the Tucson keeper for his first goal of the season.

Akira Fitzgerald and the Kickers backline held on to the team’s fourth clean sheet of the season, behind three saves from the Richmond keeper.

The Kickers hit the road next Wednesday, May 15 as they travel down to Cary, N.C. to face old USL Championship rivals North Carolina FC in the Second Round of the 2019 Lamar Hunt U.S. Open Cup. Richmond will continue their road trip getting back to league action next Saturday night, May 18 against Greenville Triumph SC. Both of these matches will be streamed live on ESPN+, plus Saturday’s match will be available live on WTVR CBS 6.3 (Comcast 206, Verizon FiOS 466). Stay up to date with all of the Kickers news at RichmondKickers.com.