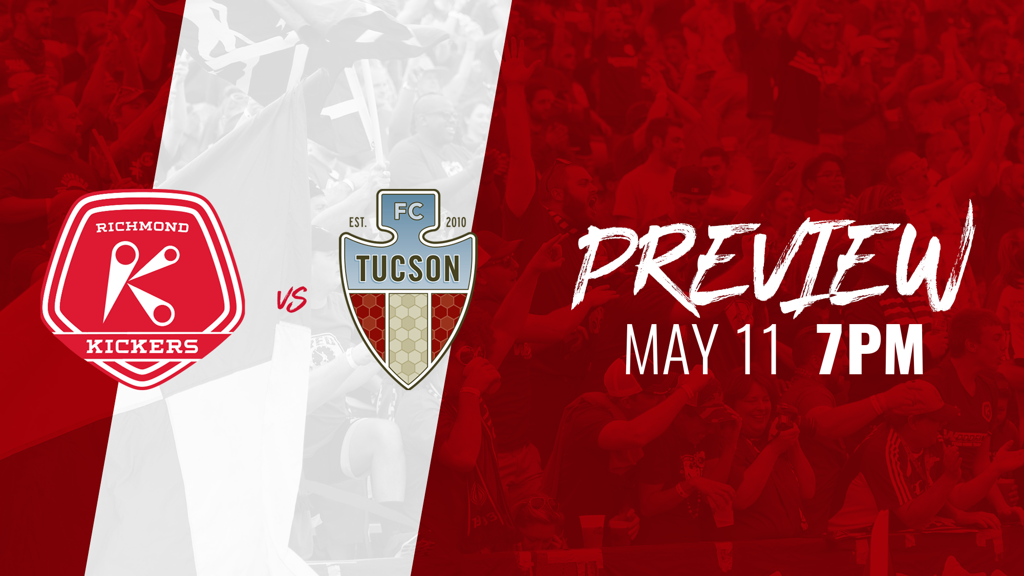 RICHMOND, Va. – (Friday, May 10, 2019) – The Richmond Kickers (2-2-2) return to USL League One action and  finish off their home stand this Saturday night as they host FC Tucson (2-2-1) at City Stadium. The gates open at 5:30 p.m. with happy hour specials on over 20 craft beers, plus wine slushees and live music from the Back Seat Drivers. The action gets going at 7:00 p.m. when the Kickers take the field to take on Tucson. Starting with Saturday’s match, the Kickers will allow dogs inside City Stadium regularly. More information on dogs inside City Stadium can be found at RichmondKickers.com/matchday-info. This match will be streamed live on ESPN+. Tickets are available now at RichmondKickers.com.

This will be the first-ever meeting between the Kickers and Tucson. The Kickers will be heading into the match after a midweek match up in the U.S. Open Cup. Tucson has not played a match since April 30, at home against Lansing Ignite FC.

The Kickers come into this match in the heels of a massive 6-2 victory in the First Round of the 2019 Lamar Hunt U.S. Open Cup Tuesday night over amateur side Virginia United. Richmond would jump ahead behind two goals from Charles Boateng in the 17th and 22nd minutes. United pulled a goal back in the 28th minute through Elias Martinez. Eli Lockaby scored his first professional goal two minutes before halftime. Three minutes into the second half, Daniel Jackson scored in his second straight match to extend the Richmond lead to 4-1. Boateng netted a hat trick in the 55th minute, followed by a fourth goal in the 75th minute. The visitors added a second goal into stoppage time as the Kickers claimed the 6-2 win.

Richmond’s last action in USL League One was last Saturday night in a dramatic 2-2 draw with Lansing Ignite FC. Dennis Chin scored his second goal of the season in the 32nd minute from a nice set from Josh Hughes. Lansing jumped into the lead after goals in the 58th and 70th minutes, a lead they held heading into the final moments of the match. Deep into stoppage time, Conor Shanosky slipped a ball through for Daniel Jackson, who turned and let a shot rip that hit the back of the net to tie it up late and salvage the draw for the Kickers.

FC Tucson will make their first trek to Richmond after an eleven day layoff, last playing April 30 at home against Lansing Ignite FC. Tucson jumped ahead in the 27th minute from Devyn Jambga, making his first career start. The home side doubled their lead through Phoenix Rising loanee Devin Vega off a free kick in the 62nd minute. FC Tucson and LAFC loanee goalkeeper Phillip Ejimadu picked up their first shutout of the season.

The Kickers hit the road next Wednesday, May 15 as they travel down to Cary, N.C. to face old USL Championship rivals North Carolina FC in the Second Round of the 2019 Lamar Hunt U.S. Open Cup. Richmond will continue their road trip getting back to league action next Saturday night, May 18 against Greenville Triumph SC. Both of these matches will be streamed live on ESPN+, plus Saturday’s match will be available live on WTVR CBS 6.3 (Comcast 206, Verizon FiOS 466). Stay up to date with all of the Kickers news at RichmondKickers.com.

Richmond: Forward Daniel Jackson (#9) has two goals in two straight matches, including the dramatic game tying goal last Saturday against Lansing. That goal earned him a spot on the USL League One Team of the Week for Week 6. Defender Conor Shanosky (#5) was also named to the Team of the Week after his assist to set up Jackson’s stoppage time screamer. The Pittsburgh, Pa. native recorded four clearances and had two interceptions as the Kickers extended their unbeaten streak to three matches. Forward Dennis Chin (#15) was the third player named on the Team of the Week, netting his second goal of the season for the Kickers in the 32nd minute to open up the scoring in Saturday’s match. The Jamaican completed 16 of 23 passes and won 9 of 14 duels in the draw.

Tucson: Midfielder Devyn Jambga (#16) made his first start and scored his first goal of the season to open up the scoring for Tucson in their 2-0 win over Lansing. Jambga made five appearances for USL Championship side Portland Timbers 2 in 2018. Midfielder Devin Vega (#15) scored his second goal of the season in his second appearance for Tucson, on loan from their parent club Phoenix Rising FC. He is in his second season with Phoenix after making 12 appearances last season after making the move from San Antonio FC. Goalkeeper Philip Ejimadu (#24) picked up his first clean sheet in the match against Lansing, posting five saves. The Los Angeles FC loanee is in his first professional season after growing up in the Nacional São Paulo academy in Brazil.