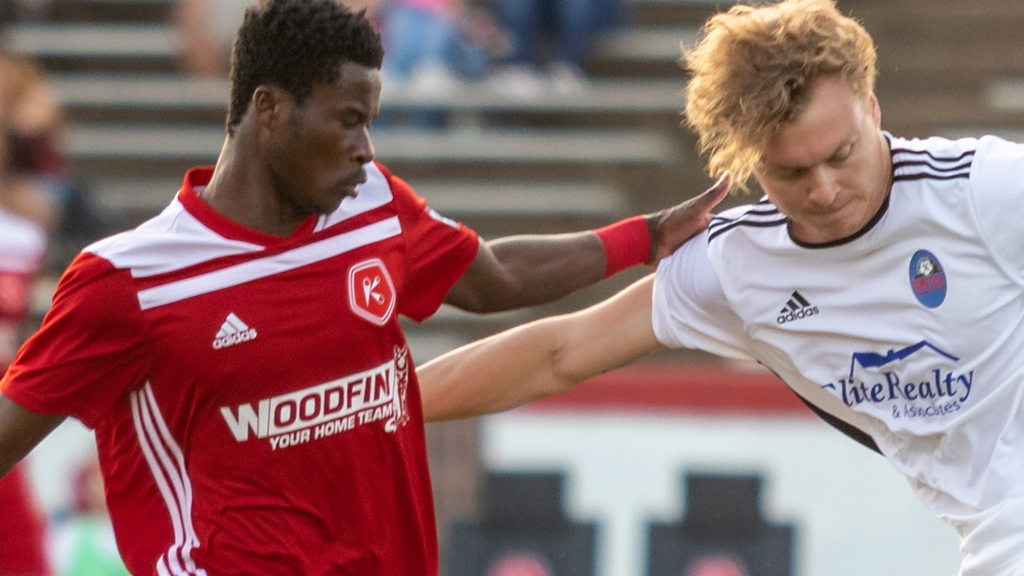 RICHMOND, Va. — (Tuesday, May 7, 2019) — The Richmond Kickers advance to the Second Round of the 2019 Lamar Hunt U.S. Open Cup following a 6-1 victory over Virginia United at City Stadium Tuesday night. The Kickers were led by four goals from Charles Boateng, followed by goals from Eli Lockaby and Daniel Jackson.

Richmond would break the deadlock in the 17th minute through Charles Boateng. Mutaya Mwape controlled the ball in the midfield and found Eli Lockaby making a run up the right flank. Lockaby ran onto the ball as he cut inside towards goal. The VCU product whipped in a quick cross for Boateng in front of goal and he made no mistake finding the back of the net.

Charles Boateng picked up a brace just five minutes later. This time Joe Gallardo set up a corner kick, that he played short for Greg Boehme. He quickly played it back for Gallardo, who sent in a cross that hit off Boateng at the top the United six yard box and in for his second of the night.

United found the back of the net in the 28th minute. Elias Martinez picked up the ball and made a run straight up the right wing. He cut inside and let a shot go from the top of the Richmond box and past a diving Akira Fitzgerald for the goal.

Two minutes before halftime, Eli Lockaby picked up his first goal of the season. Braeden Troyer stepped into the United end of the pitch and saw acres of space ahead of Lockaby to make a run up the right flank. He took a touch to get around his defender as he made a run to get into space for the shot that he snuck into the near post for his first professional goal.

Daniel Jackson scored in his second straight match, netting Richmond’s fourth goal three minutes into the second half. Eli Lockaby chipped the ball over the backline of Virginia United for Mutaya Mwape. He got to the endline and sent in a cross for Jackson right in front of goal. Jackson just took a touch to get it over Manuel Medrano and off the crossbar into the back of the net.

Charles Boateng came up with his hat trick in the 55th minute. Greg Boehme forced a turnover that fell to the feet of Justin Grove. A slight touch put the ball into the path of Boateng making a run towards goal. The Ghanian let a shot go from 30 yards out an over a diving Medrano.

Luke Pavone set up Boateng for a fourth goal in the 75th minute. Pavone started his run from the midfield line, out pacing two defenders. He slid to get the pass off for Boateng, playing the ball to the near post and in for the sixth goal of the night for Richmond.

Virginia United was able to pull back another goal in stoppage time. Ernesto Marquez, Jr. looked for a free kick on the edge of the Richmond box. His shot deflected off Braeden Troyer and fell to the feet of Bernardo Majano. He controlled it and launched a shot at the top of the Richmond box, and it was no match for Fitzgerald and into the goal.

Richmond will advance to face USL Championship club North Carolina FC in the Second Round May 15 at Sahlen’s Stadium at WakeMed Soccer Park. Kickoff for that match is set for 7:00 p.m. and will be available to stream live on ESPN+

The Kickers are back in USL League One action Saturday night, May 11 at City Stadium as they take on FC Tucson for the first time this season. It’s Craft Beer and Wine Fest, presented by Premium Distributors and New Kent Winery and supported by the Carytown Merchants Association, with over 20 craft beers on tap, plus wine slushees and live music. With Mother’s Day coming up, design a wreath and enjoy some wine with Home Grown Designs. All of the supplies, plus wine and game ticket are included for only $60.  Then, get loud with the Red Army when the Kickers take the field to face on Tucson at 7:00 p.m. Tickets are on sale now at RichmondKickers.com.