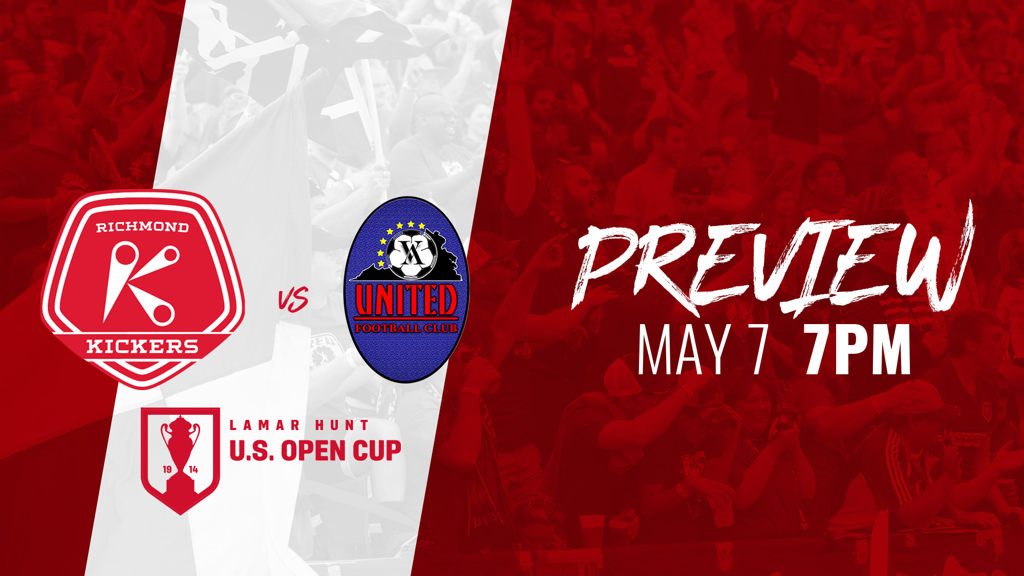 RICHMOND, Va. – (Monday, May 6, 2019) – The Richmond Kickers start their quest for the 2019 Lamar Hunt U.S. Open Cup Tuesday at City Stadium when they host amateur side Virginia United in the First Round of the tournament. Gates open at 5:30 p.m. for Food Truck Night, featuring a variety of RVA food trucks. It is also Two for Tuesday, where you can get two tickets and two beers for just $22. This match and the entire Open Cup will be available to stream live on ESPN+. Get tickets now at RichmondKickers.com.

Richmond is on a three-match unbeaten streak in USL League One play heading into Tuesday night’s match, coming off a dramatic 2-2 draw with Lansing Ignite FC Saturday night. Dennis Chin scored his second goal of the season in the 32nd minute from a nice set from Josh Hughes. Lansing jumped into the lead after goals in the 58th and 70th minutes, a lead they held heading into the final moments of the match. Deep into stoppage time, Conor Shanosky slipped a ball through for Daniel Jackson, who turned and let a shot rip that hit the back of the net to tie it up late and salvage the draw for the Kickers.

Virginia United earned a spot in this year’s tournament after penalties decided their match against World Class Premier Elite FC back on April 8. The side out of Woodbridge, Va. came back twice, both goals coming from Bernardo Majano to force extra time and penalties. United goalkeeper Manuel Medrano made one save in the shootout to give his team the 5-4 victory to move on to face the Kickers in the First Round.

The winner of this match will continue on in the tournament to face USL Championship club North Carolina FC in the Second Round May 15 at Sahlen’s Stadium at WakeMed Soccer Park. Kickoff for that match is set for 7:00 p.m. and will be available to stream live on ESPN+.

After the match, head to Bingo Beer Co., the official post match party spot for this match. Meet the players, coaches and staff and enjoy specials on food and drinks!

The Kickers are back in USL League One action Saturday night, May 11 at City Stadium as they take on FC Tucson for the first time this season. It’s Craft Beer and Wine Fest, presented by Premium Distributors and New Kent Winery and supported by the Carytown Merchants Association, with over 20 craft beers on tap, plus wine slushees and live music. With Mother’s Day coming up, design a wreath and enjoy some wine with Home Grown Designs. All of the supplies, plus wine and game ticket are included for only $60.  Then, get loud with the Red Army when the Kickers take the field to face on Tucson at 7:00 p.m. Tickets are on sale now at RichmondKickers.com.