Kickers Battle to Draw with Lansing 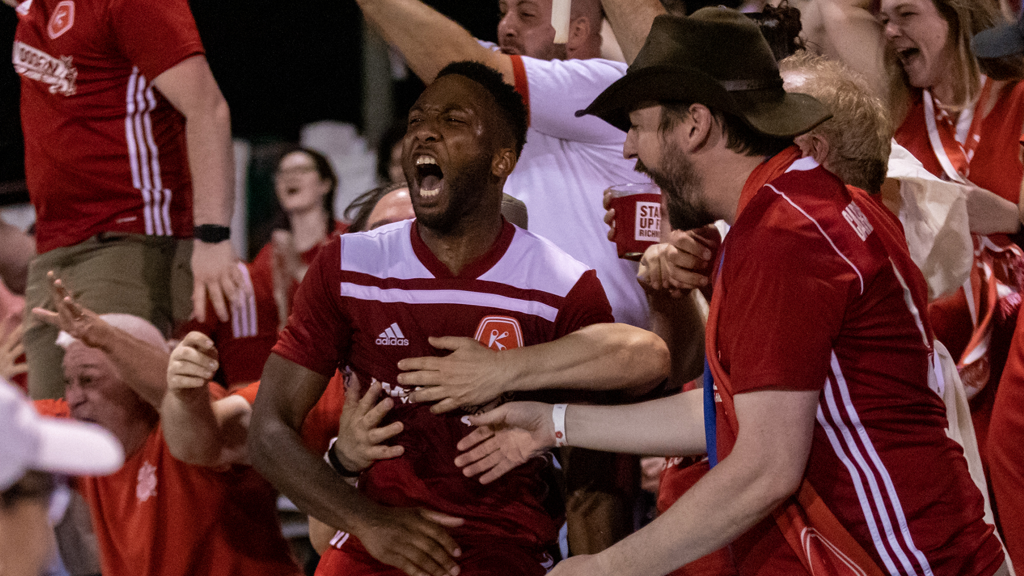 RICHMOND, Va. — (Saturday, May 4, 2019) — The Richmond Kickers (2-2-2) picked up a point behind a wild 2-2 draw with Lansing Ignite FC (2-3-1) at City Stadium Saturday night. Dennis Chin opened up the scoring for Richmond in the 32nd minute. Lansing came back with two goals in the second half from Ricky Espin-Lopez and Brandon Fricke. Daniel Jackson scored late into stoppage time for the Kickers to come away with the draw.

Five minutes into the match, Lansing nearly got on the scoreboard through Nick Moon. Moon jumped on a loose ball after and went for the quick shot from about 30 yards out on the left side. The ball hit the crossbar and was cleared out of danger.

Akira Fitzgerald was called into action just two minutes later. Grant Stoneman served in a cross from the right side to meet a leaping Moon for a header at the back post. Fitzgerald threw himself in front of the ball to knock it away before it was eventually cleared.

Richmond would jump on the board in the 32nd minute through Dennis Chin.  Mutaya Mwape won the ball in the midfield and started a run up the right side. Seeing Chin in space on the left, the Zambian midfielder played the cross. Chin made a run towards goal to get a shot off, which took a deflection falling to the feet of Josh Hughes. He quickly laid the ball off for Chin making a run, as the Jamaican fired off a shot to find the back of the net for his second goal of the season.

Lansing leveled the score in the 58th minute. Rafa Mentzingen picked up control of the ball on the right flank and started to cut inside towards the Richmond box. He squared a pass across the top of the Kickers 18 yard box for Ricky Lopez-Espin, as his shot slipped under Akira Fitzgerald for the tying goal.

Brandon Fricke added a second for the visitors in the 70th minute. Off a corner kick by Tumi Moshobane, was able to pick out Kevin Coiffic at the back post. He headed it back across goal just enough for Fricke to get a touch and put it into the back of the net.

Joe Gallardo nearly got the Kickers right back into the match in seven minutes later. After winning the ball, Gallardo charged towards goal. He slipped the ball through for Daniel Jackson, as the Lansing keeper got a touch to deflected it away. Gallardo ran onto the loose ball an quickly when for a shot that rattled the post and went over the endline.

Daniel Jackson scored a stunner in stoppage time to tie the game up late. Conor Shanosky controlled the ball in the center of the field. He started up field towards the Lansing goal, then slotted the ball through for Jackson. He quickly turned and took a touch to his right before launching a shot into the back of the net for his first goal of the season.

The Kickers are back at City Stadium this Tuesday, May 7 to open up the 2019 Lamar Hunt U.S. Open Cup against amateur side Virginia United. Gates open at 5:30 p.m. for Food Truck Night, featuring a variety of RVA food trucks. It is also Two for Tuesday, where you can get two tickets and two beers for just $22. This match and the entire Open Cup will be available to stream live on ESPN+. Get tickets now at RichmondKickers.com.