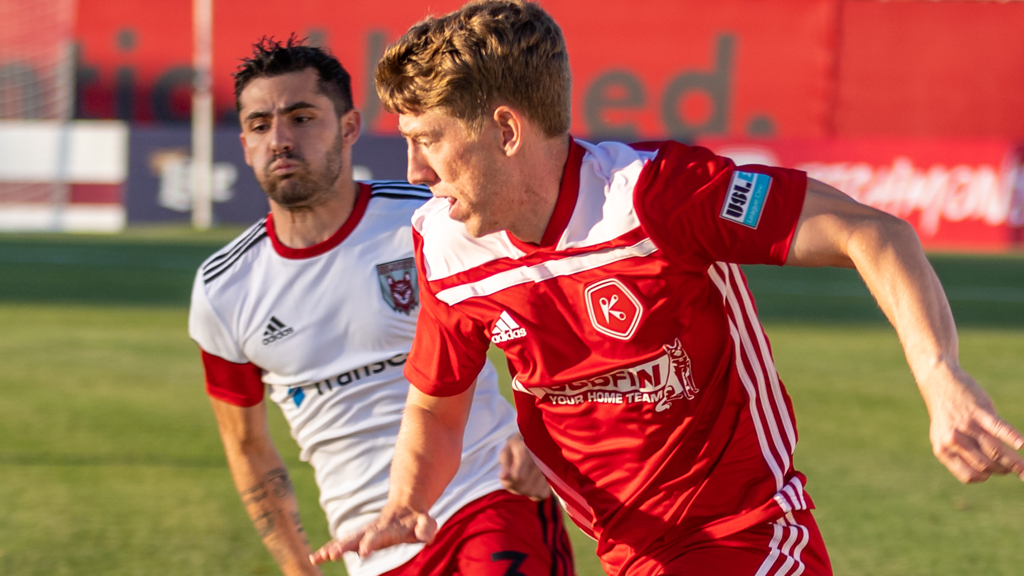 RICHMOND, Va. — (Saturday, April 27, 2019) — The Richmond Kickers (2-2-1) picked up their second straight victory Saturday night at City Stadium over Chattanooga Red Wolves SC (2-3-0). Joe Gallardo netted his second goal in as many matches in the 52nd minute after a set up from Mutaya Mwape.

Chattanooga had a chance to go up in the 17th minute. Mutaya Mwape was called for a foul on Ualefi to set up a free kick for the Red Wolves on the left side of the field just outside the Richmond box. With Ualefi and Vangjel Zguro standing over the ball, Zguro went for the quick kick low towards the far post, nearly connecting with Tony Walls diving in, as the ball skidded under him and out for a goal kick.

Five minutes later, the Kickers would have a free kick from about 40 yards out from the Chattanooga goal. Conor Doyle picked up a yellow card after grabbing Joe Gallardo from behind as he tried to make a run towards goal. Maxi Rodriguez played the ball ahead as Wahab Ackwei made a run towards goal. Alex Mangels came off his line to grab the ball before Ackwei could get to it.

Joe Gallardo was denied a goal in the 30th minute by the Chattanooga keeper. Mutaya Mwape made a run across the field as Andrew Kendell-Moullin fouled him, picking up a yellow card in the process to set up the free kick from 30 yards out. Rodriguez put his shot on frame, which forced a massive save out of Alex Mangels to prevent the Kickers midfielder.

Joe Gallardo scored in his second straight match to put Richmond up in the 52nd minute. Matt Bolduc picked up control of the ball in space, just outside of the Red Wolves box. He slotted the ball up the right wing for Mutaya Mwape. The Zambian whipped in a cross in front of goal for Gallardo to redirect into the back of the net for his third goal of the season.

Richmond came close to a second goal in the 67th minute from Josh Hughes. The Kickers midfielder picked up control on the right flank. With no one pressuring him, Hughes cut inside finding enough space to get a shot off towards the near post. Mangels stretched to make the stop and prevent the goal.

Despite Chattanooga getting five shots, the Kickers backline and Akira Fitzgerald held on to keep the visitors off the scoresheet for their second straight shutout and third of the season.

The Kickers are back at City Stadium next Saturday night for the third and final meeting with Lansing Ignite FC at 7:00 p.m. The party gets started at 5:30 p.m. for Star Wars Night, with happy hour drink specials for the first 30 minutes after the gates open with craft beer on tap and selections of wine, live music. The players will come out for warm ups in limited edition Star Wars pregame jerseys, which will be auctioned off to benefit Sportable. This match will be available to stream live on ESPN+. Tickets are available now at RichmondKickers.com.