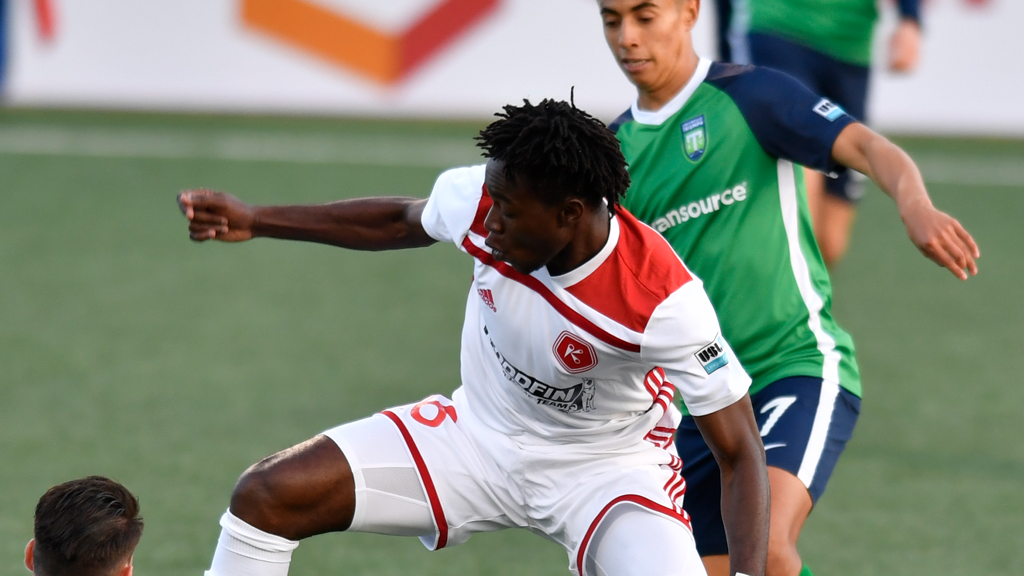 GREENVILLE, S.C. — (Saturday, April 20, 2019) — The Richmond Kickers (1-2-1) picked up their first victory of the season Saturday night on the road at Greenville Triumph SC (2-2-0). Joe Gallardo his second goal of the season in the 49th minute, set up by Matt Bolduc. Akira Fitzgerald posted his second shutout of 2019 behind a three save performance.

Greenville looked for a chance to get on the scoreboard six minutes into the match. Paul Clowes was able to win the ball at the top of the Richmond box. He went right for a shot, forcing a diving save from Akira Fitzgerald.

Another chance for Triumph SC came in the 19th minute. Christopher Bermudez was able to slip into space on the left side of the Richmond box. He looked to sneak a shot in towards the near post as Akira Fitzgerald is there again to make the stop.

Eli Lockaby put the pressure on in the 23rd minute and came close to setting up a chance for Richmond. Mutaya Mwape chipped the ball over the top up the right flank for Lockaby making a run in space. Fighting off three defenders, Lockaby made it to the end line and quickly tried to square a pass across the front of the goal. Cole Seiler was there to clear the ball out for a corner kick for Richmond.

The Kickers had a scare in the 34th minute after a shot from Jake Keegan. Cole Seiler played a long ball over the top from the right side, to the left side for Keegan. Before Conor Shanosky could step up, Keegan went for the shot that went just wide of the Kickers net.

Richmond would go ahead in the 49th minute from a great run by Joe Gallardo. Conor Shanosky got the play going, sending the ball ahead for Matt Bolduc in the center circle. The midfielder turned and played the ball quickly ahead to Gallardo.

A nervy sequence in the 66th minute gave two chances for Greenville as the Kickers defense held strong. Paul Clowes won the ball in the midfield and wanted to move the ball forward quickly to Carlos Gomez. He took a touch to put it into the path of Jake Keegan making a run towards goal. Keegan tried a quick shot that was saved by Akira Fitzgerald. Clowes followed up the loose ball as his shot was blocked off the line by Ivan Magalhães.

Two minutes later, Matt Bolduc and Joe Gallardo nearly put the Kickers ahead two goals. Josh Hughes poked the ball away from Clowes and right to the feet of Bolduc. He made a turn and got the ball to Joe Gallardo in the center of the field. Gallardo set his sights on his second goal of the night, only to be denied by the Triumph keeper, Dallas Jaye.