KICKERS SET TO MAKE HISTORY IN FRIENDLY AGAINST RCD ESPANYOL

Gates Open at 5PM for LaLiga in RVA, Kickoff at 7PM 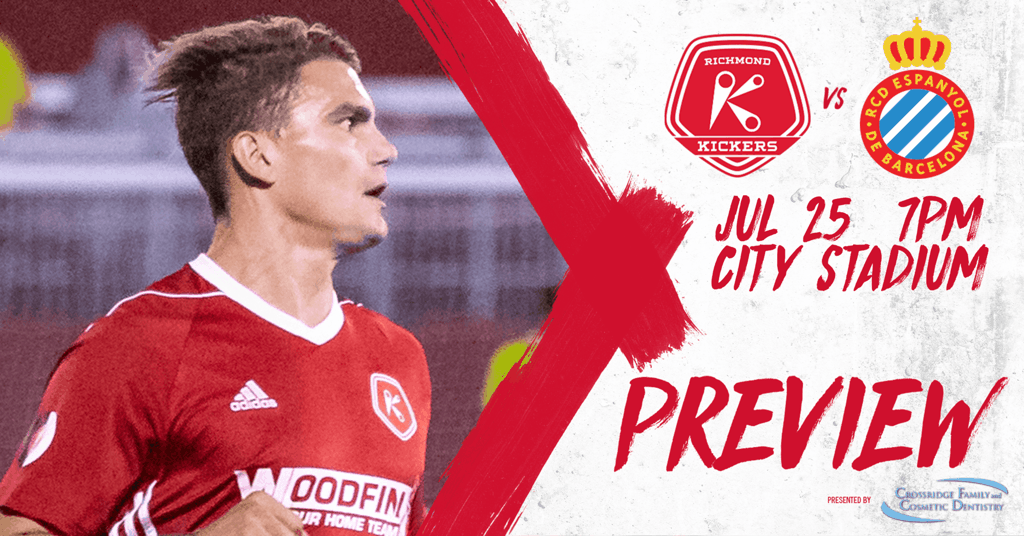 RICHMOND, Va. – (Tuesday, July 24, 2018) – History will be made at City Stadium. This Wednesday, the Richmond Kickers will play host to RCD Espanyol for an international exhibition, marking the first time that a team from the La Liga has come to Virginia. Espanyol is carrying a full-strength roster into the contest. Tickets for the friendly are available on RichmondKickers.com.

Espanyol was founded in 1900, later becoming a founding member of La Liga in 1928. Los Periquitos, as Espanyol is called by its fans, has competed in La Liga for 80 seasons. They’ve won the Copa del Rey, Spain’s annual cup competition, four times, most recently in 2006. Espanyol won the league title of the Segunda División in 1994, but have never finished on top of the standings in the Primera División. In comparison, the Kickers were formed in 1993, winning the Lamar Hunt U.S. Open Cup once in 1995. Richmond has also won the regular season league title three times, most recently in 2013.

Richmond enters the exhibition against Espanyol with a record of 5-10-3 in USL action, sitting 14th in the Eastern Conference. David Bulow replaced Leigh Cowlishaw on June 27 as the Kickers’ head coach after Cowlishaw stepped down after 19 years. Bulow is 1-2-1 in his four matches so far with his first career win coming on the road against Penn FC. Scott Thomsen scored a screamer off a free kick and Luiz Fernando doubled the lead with his a goal to give Richmond a 2-1 win on July 9. Richmond most recently tied Atlanta United 2 last Saturday from City Stadium. Brian Shriver curled a beautiful goal off the set piece to give the Kickers their only goal of the game. The match against Espanyol marks the fifth consecutive year with a high profile exhibition for the Kickers. Previously, the Richmond Kickers hosted English Premier League sides Crystal Palace (2014), West Bromwich Albion (2015), and Swansea City AFC (2016, 2017), in front of nearly 30,000 combined fans at City Stadium.

RCD Espanyol placed 11th in the La Liga table during the 2017-2018 campaign, finishing with a record of 12-13-13. The high notes of the season included wins over Real Madrid and Atletico Madrid in league play, and a victory against Barcelona in the first leg of a Copa del Rey match. Espanyol went through a five match scoreless streak from the end of March through April which resulted in manager Quique Sánchez Flores being sacked. Espanyol B head coach David Gallego took over on an interim basis and provided a boost, leading Espanyol to 13 points (four wins, one draw) over the final five games. On June 3, Joan Francesc Ferrer Sicilia, better known as Rubi, was announced as the new coach of Espanyol.

Following the exhibition, the Kickers will hit the road and travel south to face long-time rival Charleston Battery on Saturday, July 28. Richmond defeated Charleston 2-0 in the first meeting this season on June 9. Then, the Kickers will continue the road trip by heading to Pittsburgh to face the Riverhounds SC on August 1. Pittsburgh won the early season matchup between the two sides, 2-1 on June 2.

Richmond: Forward Brian Shriver (#21) leads the Kickers with six goals and six assists. He is Richmond’s most dangerous offensive weapon and a free kick specialist which was put on display in last Saturday’s draw versus Atlanta. Forward Giuseppe Gentile (#92) returned to the pitch on Saturday for the first time since May 6 when he suffered a knee injury against Bethlehem Steel FC. Gentile was his same aggressive self, flying around the pitch and attempting to cause havoc in the final third. Midfielder Braeden Troyer (#31) added eight more tackles on Saturday, increasing his total to 54 on the season, 24 more than the next best. Troyer is currently in his fourth season with the Kickers.

Espanyol: Defender Javi López (#16) is the most well-respected and longest tenured player on Espanyol, now entering his 10th season with the club. López has appeared in over 230 games over that time as he wears the captain’s armband for Espanyol. Midfielder Granero (#23) is one of the most recognizable names on Espanyol’s roster having played with Real Madrid from 2009-2012. In his first season with Espanyol in 2017, Granero appeared in 25 La Liga games and started all six Copa del Rey games. Forward Leo Baptistão (#11) is Espanyol’s top returning goal scorer after notching eight goals in La Liga last season. Baptistão played out a five year contract with Atletico Madrid before joining Espanyol in 2016.