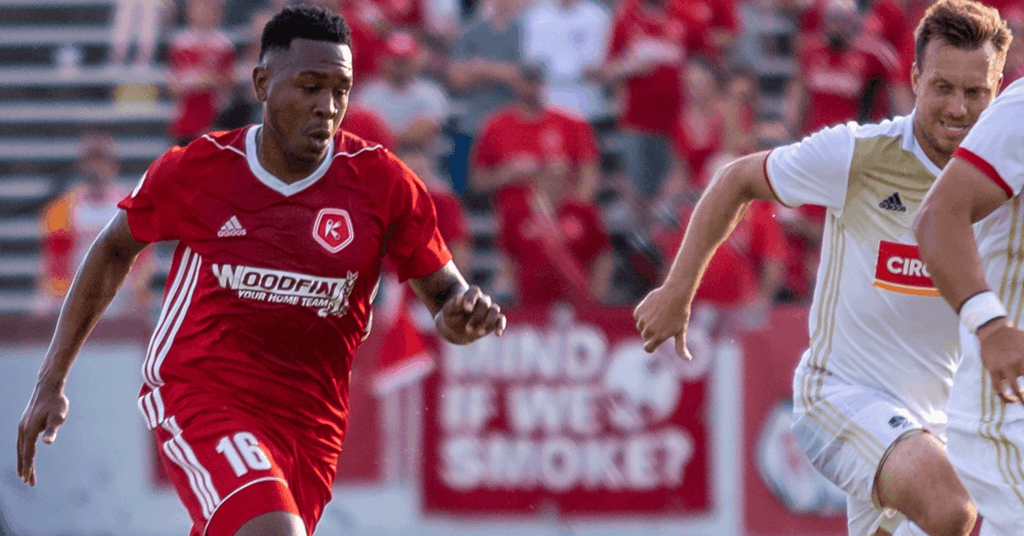 RICHMOND, Va. — (Saturday, June 30, 2018) — David Bulow made his way to the sidelines and took over the reins of the Kickers on the same bench that has been patrolled by Leigh Cowlishaw for the past 19 years. However, in Bulow’s debut, it wasn’t meant to be as the Richmond Kickers (4-9-2) fell 3-1 at home from City Stadium to North Carolina FC (5-7-3). Richmond opened the scoring on a one-time volley from Heviel Cordovés. NCFC made the most of its chances in the second half and scored three unanswered, beginning with an own goal in the 59thminute, an Austin da Luz header in the 62nd minute, and ending with an Ulrich Ewolo goal from the penalty spot in stoppage time.

"This is the beginning of it," Bulow said. "These things take time, but this is definitely a foundation. It’s the first step in a process.”

"It’s a transition period, so we’re getting adjusted to his style of play," said Kickers captain William Yomby. "Coach Dave [Bulow] prepared us for this as well. We are two days into it. We will get things right. Today we were getting towards that.”

The David Bulow era got started with a bang in the fourth minute. Scott Thomsen collected a pass down the left sideline and sent a cross into the box. Richmond’s Heviel Cordovés broke free and fired a left-footed volley off the cross that found the back of the net to give the Kickers a 1-0 advantage. It was Cuban native’s fourth goal of the season, tied for the team lead.

The Kickers nearly doubled their lead in the 13thminute. Luiz Fernando played in a ball to the box that met the head of Raul Gonzalez. Gonzalez’s header was pushed just wide of the left post and North Carolina FC walked away unscathed.

Richmond squandered another opportunity in the 32nd minute off the counterattack. Scott Thomsen laid it off to Luiz Fernando down the left sideline from just outside the box. Fernando connected with a cutting Brian Shriver whose shot missed just wide of the post.

North Carolina FC had their first big chance in the 34th minute. Marios Lomis flicked in a cross to find Daniel Ríos, but Ríos’ attempt was corralled by Richmond goalkeeper Travis Worra for the save.

NCFC had its breakthrough in the 59th minute off the corner. Kyle Bekker’s cross found Austin da Luz before his header deflected off Richmond’s Alex Lee for the own goal to level the match at 1-1.

Just a few minutes later in the 62nd minute, North Carolina FC made the most of a set piece. Kyle Bekker again connected with Austin da Luz, and this time da Luz’s header immediately found the twine to give NCFC the 2-1 advantage.

Late in the match, North Carolina FC tacked on another goal from the penalty spot when Ulrich Ewolo beat Travis Worra to extend the NCFC lead to 3-1.

Following a nine day break, the Kickers return to action on the road as they travel up north for two straight, first heading to Penn FC Monday, July 9. They will then travel to MSU Soccer Park to face New York Red Bulls II Friday, July 13. Both matches will be able to stream online through ESPN+, with the Penn FC match available live on the Kickers Official Television Partners, WTVR CBS 6 on their 6.3 sub-channel (Comcast 206, Verizon FiOS 466).