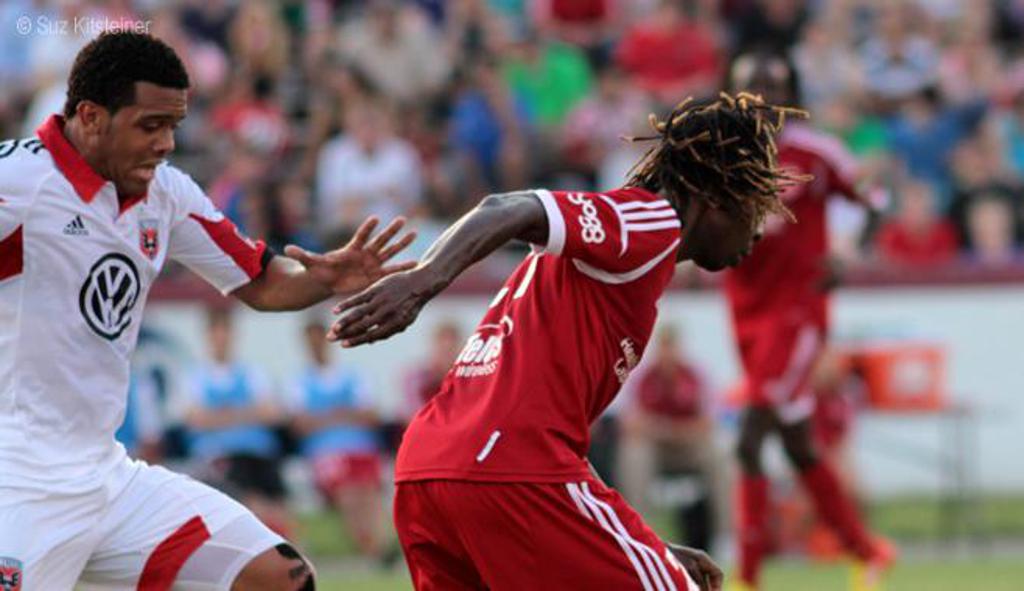 RICHMOND, VA – The Richmond Kickers’ U.S. Open Cup run came to an end Tuesday night when D.C. United advanced 4-2 on penalties.  Scoreless through 120 minutes of regulation and overtime, the winner was determined when United goalkeeper Joe Willis made a pair of heroic saves while D.C. converted all four of their penalties to advance to the Fourth Round.

The Kickers started the match on the front foot, first testing Willis in the 17th minute.  A heavily marked Stanley Nyazamba received the ball in the midfield and split defenders with a deft pass to a streaking Michael Seaton.  The 17-year old forward beat his defender and nearly got to the ball in time before Willis could intercept.

Seaton was integral in the attack again in the 25th minute when he stripped the ball in the midfield and played it back to Joseph Ngwenya.  The Zimbabwean international fed it through to Nyazamba who played the ball wide to Nate Robinson on the left wing.  Robinson took a touch into the box and drove a low ball on target only to see his attempt smothered by the staunch United goalkeeper.

Six minutes later, United midfielder Kyle Porter delivered a corner into the box from the left side, connecting with forward Lionard Pajoy but his header to the right upper 90 rattled the crossbar.  The rebound fell into a swarming box but the Kickers defense was able to clear it from harm’s way.

United saw their best chance of the night once again thwarted by the woodwork in the 35th minute when the ball floated into the mix, finding De Rosario on the left edge of the box.  The former Kickers midfielder lofted a header to the far post but his determined nod struck the upright before dancing across the open goalmouth.  Kickers goalkeeper Andrew Dykstra denied a follow up shot, scooping up the loose ball at the near post.

D.C. nearly broke the ice just before the halftime break when a communication breakdown saw a Kickers back pass dribble towards an empty net before Dykstra could scramble back to wrap it around the post.  On the resulting corner kick, Porter served an inswinger into the box but his cross was cleared over the opposite endline.  Midfielder Nick DeLeon lined up the corner, finding Conor Shanosky at the penalty spot but his diving header whizzed inches past the right post.

The Kickers looked to end the stalemate in the 50th minute when forward Jason Yeisley broke through the defense at the left edge of the box and whipped in a cross to the near post.  Defender William Yomby soared through the box and threw his body into the ball’s path but Willis beat him to the punch.

Five minutes later, Nyazamba kept the ball from going over the touchline, deep on the left wing and played Yeisley into the box.  Under pressure, the streaking forward got off a bending shot from point blank range but Willis once again foiled his effort.

A defensive battle ensued until the 90th minute when the Kickers earned a free kick just outside the box.  Robinson lined it up and chipped the ball over the defensive wall but it dipped just over the crossbar to push the match into overtime.

The Kickers weathered a renewed United attack through the first overtime period and won the advantage in the final 15 minutes when Chris Korb earned his second yellow and Carlos Ruiz was issued a straight red card leaving United with nine men for the remainder of extra time.  Needing penalties to decide the fate of the match, defender Sascha Gorres and Ngwenya were each denied by consecutive diving saves to the left post before Luke Vercollone and Robinson converted their shots.  United went four for four with De Rosario, Perry Kitchen, Nick DeLeon and James Riley making no mistake from the spot to send their side through to the next round.

The Richmond Kickers return to regular season action this Friday, May 31 when they host the USL PRO expansion franchise Phoenix FC Wolves.  Kickoff is set for 7:00 p.m. at City Stadium and tickets are on sale now at RichmondKickers.com.