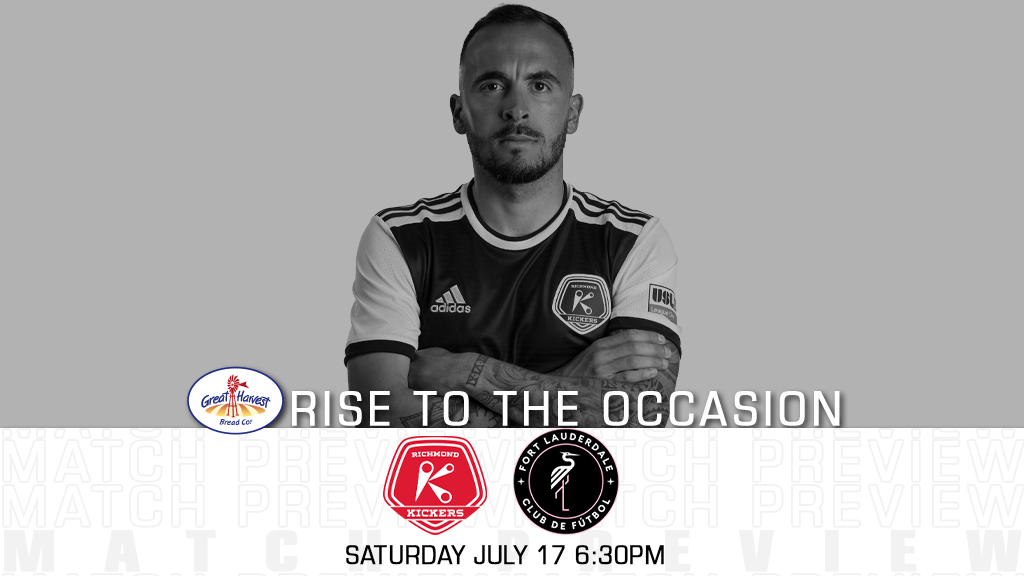 Internet: ESPN+
TV (Local): WTVR CBS 6.3 (Comcast 206/Verizon FiOS 466)
RICHMOND, Va. – The Richmond Kickers (4-4-3) return to City Stadium for their second match of the season against MLS-affiliate Fort Lauderdale CF (5-7-2), on July 17. Kickoff for this match is set for 6:30 p.m. ET.
Richmond’s previous match was at City Stadium as they hosted North Texas SC. The visitors struck first but were answered quickly with a spectacular goal by Emiliano Terzaghi. Juan Pablo Monticelli sent a cross in from the left wing and Terzaghi swiftly flicked it into the far post with a heel behind his back. Terzaghi’s goal was voted the USL League One’s Fan’s Choice Goal of the Week, but the drama wasn’t over and North Texas answered just before the first half came to a close.

Richmond came out in the second half and earned a penalty which Terzaghi converted adding to his six-goal tally for the season so far. Then, Terzaghi would assist Jonathan Bolanos for a brilliant lofted shot that would beat several NTX defenders and the goalie as well to hit the corner of the post and bounce over the goal line. Richmond Kickers finished the match with 13 shots. Bolanos and Terzaghi combined for seven shots and five shots on target. Zaca Moran was all over the field and had a passing accuracy of 89.5%. Jalen Crisler had eight clearances and five interceptions and Akira Fitzgerald made six saves to see out the 3-2 win over North Texas for the first time in Richmond Kickers’ history.
Fort Lauderdale’s last match was a 2-1 loss against FC Tucson. Fort Lauderdale finished the match with nine shots and a goal from Edison Azcona. Frank Nodarse had a passing accuracy of 88.4% and Aimé Mabika had a passing accuracy of 82.6%. Fort Lauderdale is currently sitting at fourth place in the league table with just two more points than the Kickers.

The last matchup between Fort Lauderdale and Richmond was an early-season match at Fort Lauderdale which resulted in a 2-1 loss for the Kickers. The Kickers were unlucky to drop points in the match after experiencing several near misses that likely would have changed the result drastically. However, this time Fort Lauderdale will have to face Richmond at City Stadium where the Kickers have earned three of their four wins this season.
Following the match with Fort Lauderdale, Richmond’s next match will be at North Carolina FC on July 21. The last time the two teams matched up was under a month ago at the end of June when Terzaghi opened up the game with an early goal. However, North Carolina would come back with two goals of their own and put an end to Richmond’s undefeated June streak. For their third matchup of the season, Richmond will have a chance to level the season series with NCFC. Kickoff for the match in Cary, N.C. is set for 7:00 p.m. ET.
Don’t miss a moment of the 2021 season at City Stadium with your Kickers+ subscription. Kickers+ is a brand new subscription service for the 2021 season that provides fans tons of value, flexibility, and sweet perks! Sign up today for only $59.99 - Kickers+ benefits include 50% off tickets to any regular season home match, 15% off merchandise at shop.richmondkickers.com, exclusive digital content, member events, and more! Click here for more info and to join today!
Stay up to date with all of the Kickers news at RichmondKickers.com and on social media on Facebook, Twitter, Instagram, and YouTube. Download the Richmond Kickers mobile app for news, contests, and more!

Emiliano Terzaghi (#32) played arguably his best game of the season so far against North Texas. Scoring a pair of goals, and making the assist for the game-winning goal, Terzaghi also made four key passes and 14 good passes and crosses.
Jonathan Bolanos (#17) came off the bench against North Texas and immediately made an impact, with his pace up the left wing. Bolanos had three shots on target and scored the game-winning goal.
Victor Falck (#23) was a silent maestro in the midfield against North Texas. It was because of his incredible shot outside of the box that the ball rebounded for the cross that led to Terzaghi’s goal. Falck had a passing accuracy of 70.8% into the opposition's box and had two shots on target as well as winning 85.7% of his duels.

Shaan Hundal (#10) is Fort Lauderdale’s leading goal scorer with five goals and he averages a goal every 190 minutes. In his last match against FC Tucson, Hundal had a passing accuracy of 90% and made 16 good passes and crosses.
George Acosta (#30) has a passing accuracy of 83.5% in the season so far and leads the FTL squad with six assists and even has a goal to his name. In his last match against Toronto FC, Acosta made 20 passes into the opposition's half and an 80% passing accuracy.
Ethan Hardin (#5) is a massive presence in the FTL defensive backline. He has the most clearances in the team with 39 and has an 89.1% passing accuracy over the length of the season so far.