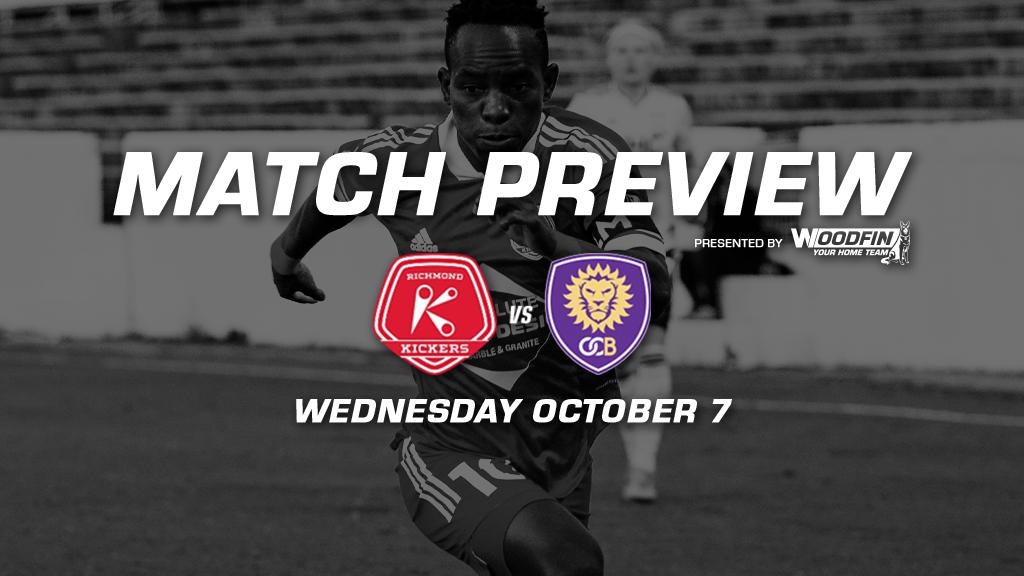 RICHMOND, Va. – (Tuesday, October 6, 2020) – The Richmond Kickers (6-3-2) return back to City Stadium for a pair of home matches, starting this Saturday night hosting Orlando City B (1-7-3). Kickoff for this match is scheduled for 6:30 p.m. and will air live on WTVR CBS 6.3 (Comcast 206, Verizon 466) and streaming on ESPN+. A limited number of tickets are still available at RichmondKickers.com/Tickets.
A series that dates back to both clubs’ time in the USL Championship, the Kickers hold the edge with a record of 4-2-1. Orlando bested the Kickers 3-2 in the first time of three meetings between the two clubs in 2019. Moises Tablante and Serginho got the home side out to an early lead. Eli Lockaby and Josh Hughes looked to level the score until a late penalty to OCB gave them the win.
Both matches at City Stadium saw the Kickers take the victory. Dennis Chin had the lone goal of the night July 20, which also saw both teams reduced due to red cards. Conor Shanosky and Charles Boateng scored in the season finale to end the 2019 season on a win.
Richmond only has a short amount of time to bounce back from last Saturday’s 0-4 home loss to New England Revolution II. The Kickers had a couple of chances early, first with Luke Pavone putting his header just over the bar just four minutes into the match. Wahab Ackwei sent his header just wide of the goal in the 22nd minute after a free kick by Mutaya Mwape. New England struck first only a minute later when Orlando Sinclair headed the ball back towards goal and it took a deflection off Kyle Venter for an own goal. Nicolas Firmino converted a penalty in the 31st minute to double the visitors lead. Firmino was involved with the third goal in the 81st minute when his cross that was intended for Justin Rennicks came off Mumbi Kwesele for the second own goal of the night. Only two minutes later, Damian Rivera chipped the ball over Akira Fitzgerald for the fourth goal for Revolution II.
Orlando comes into Wednesday night’s match after falling to the league leaders Greenville Triumph SC 0-2 last Friday night in Greenville. Both teams went over an hour without scoring until Greenville broke the deadlock in the 65th minute. Alex Morrell slotted the ball through for Lachlan McLean. He cut to his left before going for a shot that beat Austin Aviza for the opener. Four minutes later it was more of the same from Greenville. This time Jake Keegan pounced on an errant pass by Orlando and found Morrell in acres of space in behind the Orlando backline. He calmly took his shot into nearly the identical spot as McLean.
The Kickers are right back at it Saturday night, as they hit the road to face reigning champions North Texas SC at Globe Life Park. Kickoff for that match is set for 8:00 p.m. ET and will be available to watch live on WTVR CBS 6.3 and on ESPN+.
Stay up to date with the latest news from the Kickers at RichmondKickers.com and on the official team app.

Forward Oalex Anderson (#15) made his debut for Richmond last Saturday night, playing the final 19 minutes. Anderson joins the Kickers after MLS Cup winning experience with the Seattle Sounders following a successful stint with the USL Championship team. Midfielder Mutaya Mwape (#10) has one of the best passing accuracies for the club this season, completing 85.3 percent of his passes. The Zambian has one assist in 10 matches with the Kickers this season. Defender Wahab Ackwei (#18) has slotted into a new role for the Kickers, playing as a right back in last Saturday’s match. He has 17 clearances to go with five blocks and five interceptions in 2020 for Richmond.

Forward Wilfredo Rivera (#62) leads the team in scoring this season with two goals in 11 matches. The native of San Juan, Puerto Rico signed an academy contract with OCB after spending the last three years in the Orlando City SC Academy. He has three caps with the Puerto Rico U17 National Team. Forward Moises Tablante (#67) is back with Orlando this season, with a team-high three assists in 11 games. Tablante made 51 appearances for the OCSC Academy before signing his first professional deal with OCB last season. Goalkeeper Austin Aviza (#61) has 33 saves from eight matches this season with OCB. He has also tallied the only clean sheet for the team back on August 7 at New England.