Match to be Shown Live on WTVR CBS 6.3 and on ESPN+ 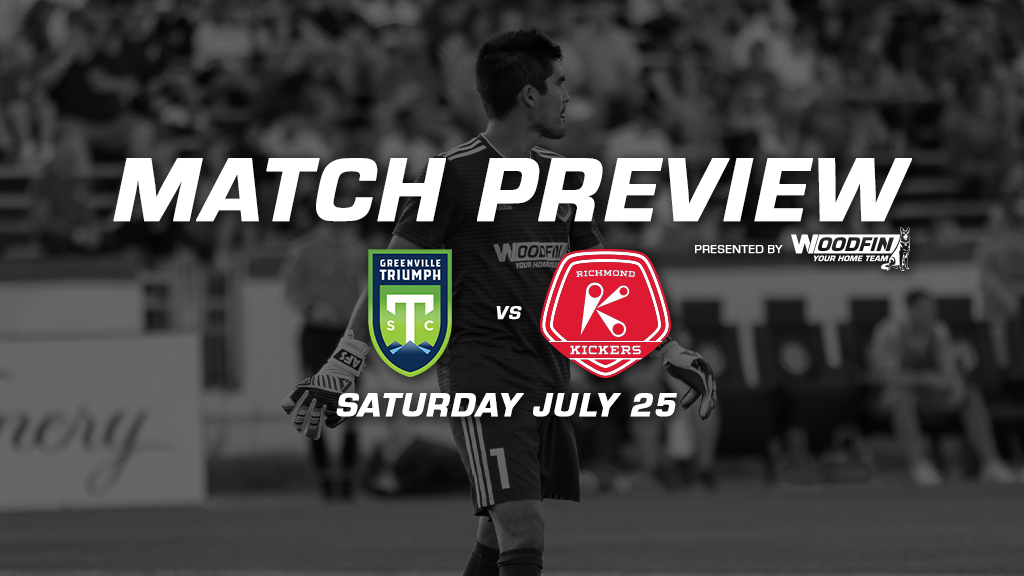 RICHMOND, Va. – (Friday, July 23, 2020) – The Richmond Kickers (0-0-0) look to get  the 2020 USL League One season started this Saturday night on the road at Legacy Early College against the Greenville Triumph SC (1-0-0). This match is set to kick off at 7:00 p.m. live locally on WTVR CBS 6.3 (Comcast 206, Verizon FiOS 466) and streaming on ESPN+.
This will be the fourth meeting between Richmond and Greenville, after the Kickers posted a 2-1-0 record against the Triumph in 2019 and claimed the first-ever Bon Secours Cup. The clubs’ first clash came April  20 at Legacy Early College, where a 49th minute goal by Joe Gallardo from a Matt Bolduc assist gave Richmond the victory. Nearly a month later, Greenville would best the Kickers after a solo goal from Jake Keegan. Richmond would win the Bon Secours Cup after another 1-0 win over the Triumph, this time from Braeden Troyer as he headed in a goal from a Gallardo cross just before halftime.
Richmond will be itching to get on the field Saturday after their match on July 18 against South Georgia Tormenta FC was postponed to July 28. Darren Sawatzky will be taking the helm for his first official match as the Kickers Head Coach and Sporting Director. A core of the 2019 squad returns this season along with 12 new players, lead  by 2019 Goalkeeper of the Year Finalist, Akria Fitzgerald.
Greenville opened the 2020 USL League One season last Saturday night, defeating one of the league’s newest clubs, Fort Lauderdale CF 2-0 at Inter Miami CF Stadium. In first half stoppage time, former Tormenta FC midfielder Alex Morrell scored the opener for Greenville from a long ball over the top from Aaron Walker to give  the visitors the lead heading into the break. Four minutes into the second half, Jake Keegan made it 2-0 after getting his head on a cross for Morrell at the near post.
The Kickers go back on the road next Tuesday, July 28 to face South Georgia Tormenta FC in the rescheduled match at Erk Russell Park. Kickoff for the match is at 7:00 p.m. live locally on WTVR CBS 6.3 and streaming on ESPN+.
The 2020 Richmond Kickers Home Opener, presented by Woodfin, is set for Saturday, August 1 at 6:30 p.m. as league newcomers Fort Lauderdale CF make their first-ever trip to City Stadium.
Stay up to date with the latest news from the Kickers at RichmondKickers.com and on the official team app.

Richmond: Back in goal for Richmond this season, goalkeeper Akira Fitzgerald (#1) looks to build off a campaign that earned him a nomination for 2019 USL League One Goalkeeper of the Year. The veteran keeper had eight clean sheets and made 72 saves for a goals against average of 1.23 last season. One of the big signings during the offseason, forward Emiliano Terzaghi (#32) makes the move to the United States after an extensive career in Argentina. Most notably, he played a majority of his career with Club Atlético Banfield in the Argentine ‎Primera División, including scoring the game-tying goal against Boca Juniors in the final minute of the match. Making the trek back to the East Coast, former Virginia Tech standout Devante Dubose (#67) will make his debut with Richmond after his professional career took him to Arizona, Oklahoma and California after four years in Blacksburg.
Greenville: Midfielder Alex Morrell (#7) made his debut for Greenville with a goal and an assist in the 2-0 win over Fort Lauderdale CF. The former Tormenta FC man had three goals in 16 matches in South Georgia last season. Forward Jake Keegan (#9) returns for Greenville this season after a team-high nine goals in 22 matches last year. Keegan found the back of the net just before halftime to put the Triumph up over Fort Lauderdale. Goalkeeper Dallas Jaye (#22) will look to build off his impressive 2019 season that saw him come away with 14 clean sheets. He is a familiar face for Kickers Head Coach Darren Sawatzky, who coached him with the Guam National Team. Jaye posted his first shutout of the season last Saturday against Fort Lauderdale, making two saves.