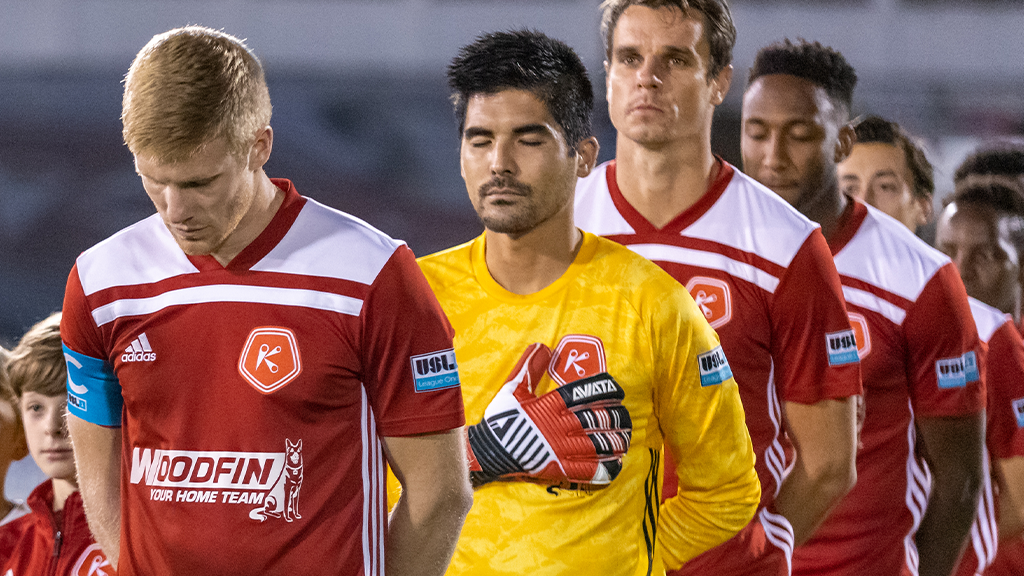 RICHMOND, Va. — (Saturday, October 5, 2019) — The Richmond Kickers (9-14-5) closed out the 2019 USL League One season Saturday night at City Stadium behind a 2-0 victory over Orlando City B (4-20-4). Conor Shanosky found the back of the net in the 31st minute, followed by Charles Boateng five minutes later. Mutaya Mwape assisted on both goals. Braeden Troyer finished his professional career with a victory after wearing the captain’s armband.

Just a minute into the match, Braden Troyer nearly put the Kickers up 1-0 early. Nick Retzlaff sent a corner kick in towards the near post. Troyer broke free of his defender to get a header on the ball. His shot grazed the top of the crossbar and out for a goal kick.

Braeden Troyer got involved again in the 15th minute looking for the opener. He picked up control of the ball on the right wing. As he turned, he quickly fed the ball through to Greg Boehme going for goal. His shot was saved by Chrsitian Herrera.

Wahab Ackwei had a last ditch block in the 19th minute to keep Orlando off the board. Thiago Souza pounced on an errant pass took a chance on goal. Ackwei made a run to get a foot on the ball before it slipped in for the opener.

The Kickers kept searching for an opener in the 26th minute. Nick Retzlaff served in a free kick from the left wing. Wahab Ackwei made the far post run and got a head on the ball, putting his shot just wide.

Back to back chances came for Richmond in the 26th minute. Nick Retzlaff looked to connect with a center back at the back post again. Retzlaff chipped in a pass that Conor Shanosky was able to catch on the volley, only to have his shot blocked out by Herrera. Mutaya Mwape sent in the ensuing corner kick for Braeden Troyer. He put his header towards goal, only putting it just wide.

The Kickers would finally break through the deadlock in the 31st minute. Mutaya Mwape stood over a free kick on the left side. He was able to find Conor Shanosky at the far post for a header, that found the back of the net for his first goal of the season.

Charles Boateng made it 2-0 for Richmond only five minutes later. Mutaya Mwape looked for space across the top of the box. He cut over to the left wing. As he looked up, Charles Boateng was making a run inside box. The two connected as Boateng slid in for the second goal of the night and his second of the season.

Matt Bolduc had a pair of chances in the 68th minute. Mutaya Mwape sent the ball out to Bolduc on the right edge of the box. He looked to sneak in a shot before he reached the endline. Herrera made the save as the ball bounced back out for Bolduc. The midfielder looked to turn towards goal, instead spinning the opposite way to get into nearly the same spot before going for a shot again, this time with Herrera pushing it out for a corner.

Two minutes before the end of the 90, Akira Fitzgerald came up with a massive save. Rafael Santos slipped through into the Kickers box.