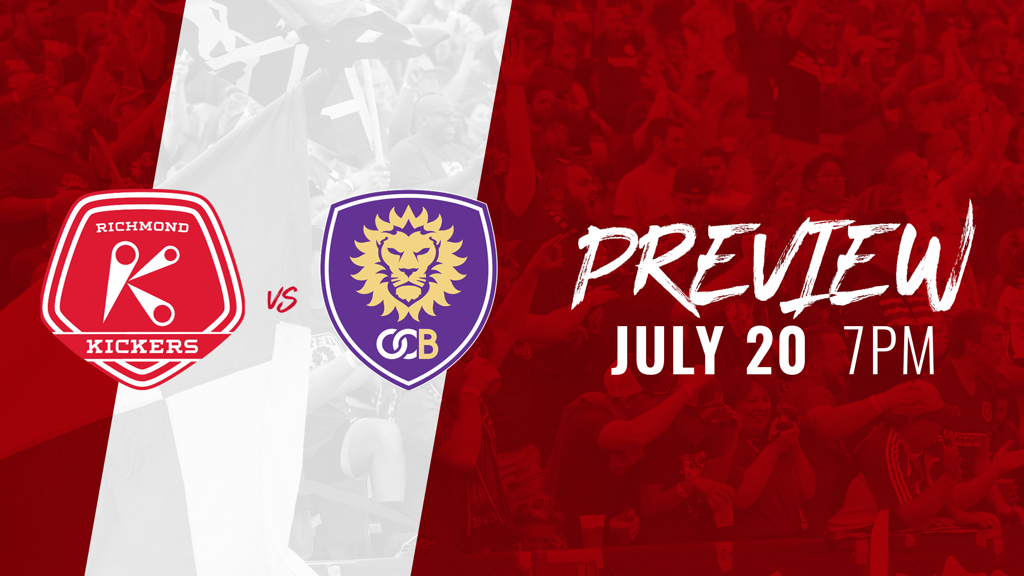 RICHMOND, Va. – (Friday, July 19, 2019) – The Richmond Kickers (3-9-3) conclude their two-match homestand this Saturday night as they host Orlando City B (3-10-4). Get on the pitch starting at 4:30 p.m. with Yoga on the Pitch, led by Aliza Sterling of True North Yoga. Yoga is included free with purchase of a game ticket. The gates officially open up at 5:30 p.m. with half-off craft beers on tap until 6:00 p.m., live music from Flat Rate Entertainment featuring Kevin Bledsoe. Then, the Kickers take the field to face Orlando at 7:00 p.m. Get your tickets now at RichmondKickers.com.

This will mark the second of three meetings with Orlando this season, with the Lions taking a 3-2 victory down on their home pitch in Orlando, Fl. back on May 22. Orlando and Richmond will meet for the final time this season on Saturday, October 5th, the final game of regular season play. The series is tied at 2-2-1 all-time between the two clubs.

Although the Kickers have struggled to break their current scoreless streak, the defensive end has had its fair share of bright spots since the start of the summer. Following an unlikely wunderstrike and a set piece goal in the opening 14 minutes, Richmond pulled together defensively, keeping league-leading North Texas SC to just one shot on goal in the final 76 minutes of play this past Saturday. Head Coach David Bulow and his staff expect the team to build off that defensive turnaround to influence the outcome against Orlando.

Orlando dropped a 1-0 decision last week at Greenville Triumph SC when the Triumph’s Aaron Walker broke the tie in the 88th minute for the South Carolina club. Goalie Christian Herrera made three saves, one of those being a penalty kick in the 18th minute. Orlando has not celebrated a win since June 7th, when they defeated Forward Madison FC 2-1. Further exacerbating Orlando’s current form, the team has conceded the most goals in USL League One with 28.

The Kickers will be on the road for a near month-long stretch, beginning with Toronto FC II next Friday, July 26th at 3:00 PM at BMO Training Ground. Richmond will be back home on Saturday, August 20th to face Toronto for the second time in 3 games. Purchase your tickets now at RichmondKickers.com.

Richmond: Key White (#25) is the flashy new car on the lot for the Kickers. The Richmond United academy grad played 58 minutes and registered his first shot in his professional debut on Saturday night against North Texas. Midfielder Greg Boehme (#28) made just his third start of the season on Saturday and he saw his first game action since June 8 at Tucson. Boehme flashes his effectiveness on offense with three key passes, creating chances for his teammates. He also has six interceptions, showing off his nose for the ball and his ability to help the transition from defense to offense. Defensively, Wahab Ackwei (#8) has been a stalwart on the backline. Ackwei has 56 clearances and a team-high eight blocks. His 29 interceptions are second-highest on the team and his pass completion percentage in the Kickers’ own half is over 90 percent.

Orlando: Midfielder Koby Osei-Wusu (#8) makes his return to Richmond. After spending the 2018 season with the Kickers, Osei-Wusu signed with Orlando in the offseason. Currently, he is second on the team in goals (3) and he has completed over 90 percent of his passes. Forward Serginho (#5) leads the team in shots with 26 but has scored just one goal in the 17 games he’s played in. That should not deter the Kickers from trying to defend him, however. He distributes the ball effectively, displayed by his average of 51 passes per game and a team-high three assists. Serginho registered an assist and scored a goal of his own in a 3-2 win against Richmond on May 22. Goalkeeper Juliano Chade (#1) got the start in net for Orlando in the first matchup between Orlando City and Richmond. He stopped four shots and allowed two goals in the win. He averages more than one goal a game allowed but in his last start on July 10 against Chattanooga, he stopped five shots and allowed just one goal. Chade is second in USL League One play in saves with 44.