Kickers Fall on the Road at Chattanooga 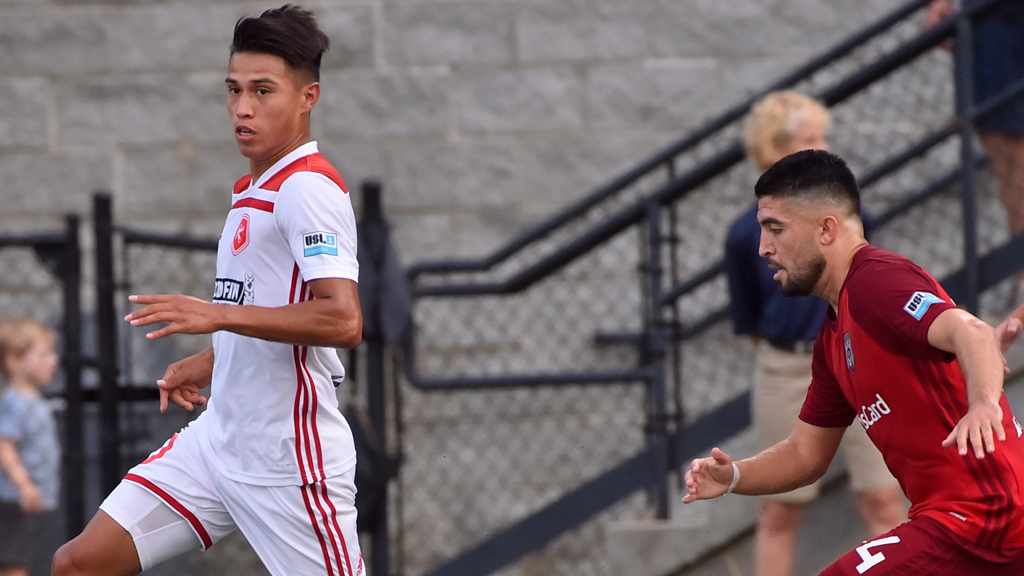 CHATTANOOGA, Tn. — (Saturday, June 29, 2019) — The Richmond Kickers (3-8-3) were defeated on the road by Chattanooga Red Wolves SC (6-4-3) Saturday night at David Stanton Field. Steven Beattie scored the lone goal of the match in the seventh minute to claim all three points for the home side.

Seven minutes into the match it would be Chattanooga that got on the scoresheet first. Amirgy Pineda picked up control of the ball on the right flank. He changed up the attack, switching the ball over to Sito Seoane on the left wing. Seoane played a cross in for Steven Beattie at the Richmond six and redirected it into the goal.

Chattanooga kept the pressure on in the 30th minute. From a free kick on the right side, Pineda was able to connect with Beattie making a far post run. Beattie got his head on the ball, putting his shot off the post. Conor Doyle was able to get on the loose ball and tried for the shot that went wide and was eventually cleared.

Alex Ainscough got in behind the Chattanooga backline in the 35th minute. Joe Gallardo won control of the ball in the center of the field. With his back to goal, Gallardo quickly turned to see Ainscough making a run up the right wing and found him with a chip over the top. Ainscough went for the shot that ended up sailing high of the goal.

Three minutes later, Nick Retzlaff found space for a shot. Alex Ainscough looked to get the ball in the box as it was blocked by Chattanooga. The ball rolled out to Maxi Rodriguez, who quickly played the ball ahead to Nick Retzlaff. Without an open option, Retzlaff tried for the shot that was stopped by Alex Mangels.

Joe Gallardo followed up with a chance of his own in the 39th minute. Charles Boateng kept the ball in play on the endline and found Eli Lockaby in support. Lockaby sent the ball to Gallardo on the edge of the box. He elected to go for the shot, despite the angle, nearly finding the upper 90.

Gallardo nearly found the tying goal in the 43rd minute. Maxi Rodriguez played a great ball for Mutaya Mwape making a run up the right wing. Shaking off his defender, Mwape got to the endline to whip in a cross trying to find Gallardo making a run towards goal. The cross was just a bit ahead of Gallardo as Tony Walls got to the ball first to clear it away from danger.

Just before the referee blew the whistle to end the half, the Kickers would get one last chance. Alex Mangels threw the ball out for Tony Walls to look to get an attack going, as Eli Lockaby beat Walls to the ball and started a run up the left wing. Charles Boateng picked out space at the top of the Chattanooga box, just in time for Lockaby to find him with a pass. The Ghanian let a shot go only to have it blocked and picked up by Mangels.

Chattanooga found their first shot of the second half in the 56th minute. Amirgy Pineda found a way to get away from Maxi Rodriguez and squared a pass for YaYa Cisse in space just outside the Richmond box. With time, Cisse went for the shot that went well high and no danger to Akira Fitzgerald.

Joe Gallardo looked for an equalizer in the 68th minute. Ivan Magalhães wanted to get the ball over the top for Gallardo. Nicholas Amponsah got a head on the ball, knocking it down to the feet of Gallardo continuing his run. He was not able to enough on his shot with Mangels making the save.

Two minutes later, Maxi Rodriguez had his chance blocked. Joe Gallardo put the ball into the box for Mutaya Mwape. The midfielder pulled the ball back for Maxi Rodriguez at the top of the box, going for the one time effort that was blocked out for a corner kick by Nicholas Amponsah.

An opportunity came late for the Kickers. Maxi Rodriguez played the ball through a pack of players to find Daniel Jackson in enough space for a shot. Jackson tried to redirect the ball towards goal, putting it just wide of the goal.