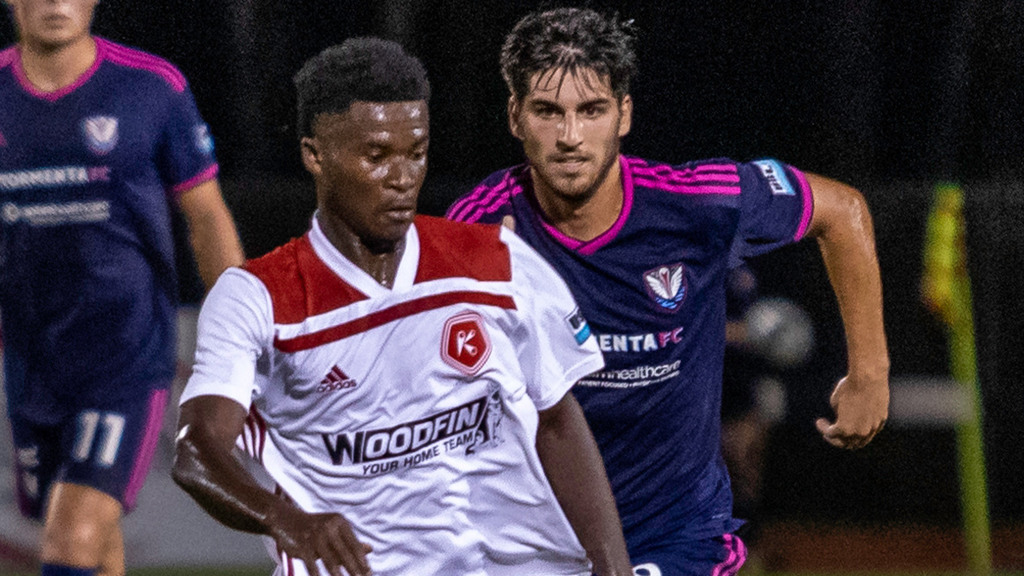 Seven minutes into the match, Tormenta looked to take an early lead. Charlie Dennis served in a corner that Akira Fitzgerald was able to get enough on it to try and punch it away. Joshua Phelps tried for the bicycle kick, as his effort went right to the Richmond keeper.

The Kickers won a free kick in the 15th minute. Jannik Eckenrode played the ball ahead for Joe Gallardo up the left wing, and then cut across trying to find space for a shot outside the Tormenta box as he was fouled by Conner Antley.  Gallardo stepped up to take the free kick that pinged off the wall and out for a corner kick.

Mutaya Mwape looked to set up a chance for Jannik Eckenrode in the 37th minute. Eli Lockaby won the ball off Jerry Saint-Vil and started his run towards goal. He played the ball to his right for Mutaya Mwape to sneak in behind. Mwape looked to set the ball for Eckenrode making a trailing run for a shot, as the pass was just a step ahead and eventually cleared away by Tormenta.

Joe Gallardo had a rocket of a shot in the 54th minute that came close to getting Richmond on the board. Conor Shanosky sent a pass out to Eli Lockaby on the right flank. He had a give-and-go with Gallardo continuing up the wing. Lockaby played the ball back for Gallardo cutting towards the center of the pitch, launching a shot from about 25 yards out that went just wide of the far post.

Tormenta broke the deadlock in the 83rd minute from the penalty spot. Wahab Ackwei was battling with Lucas Continho, as the Tormenta player hit the turf, the referee pointed to the spot and awarded the penalty. Marco Micaletto put his shot to Fitzgerald’s left, sending the keeper the wrong way.

Richmond would be reduced to ten men in the 87th minute after Conor Shanosky received his second yellow card in a two minute span.

The Kickers continue their road trip next Saturday night, June 29 as they travel to face Chattanooga Red Wolves SC at David Stanton Field. The kickoff for that match is at 7:00 p.m. and will be available live on WTVR CBS 6.3 (Comcast 206, Verizon FiOS 466) and streaming online through ESPN+. Stay up to date with all of the Kickers news at RichmondKickers.com.