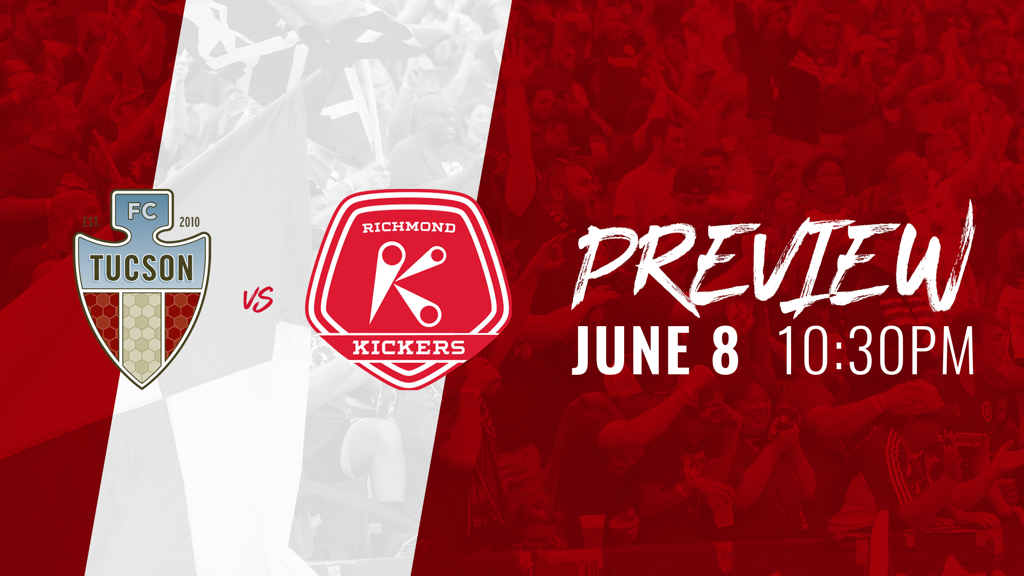 Saturday’s match will mark the second of three meetings between the two clubs this season. The Kickers claimed a 2-0 victory at City Stadium back on May 11 in the first match. Wahab Ackwei set up Joe Gallardo in the 83rd minute to put Richmond ahead 1-0. Heading into stoppage time, Mutaya Mwape was in space for Matt Bolduc to slide the ball to and add the insurance goal to claim all three points.

Richmond will be looking to be getting back into the win column after three straight league defeats, including last Saturday’s 0-3 home loss to North Texas SC. Dante Sealy scored in the 27th minute to give the visitors the lead early. He continued the attack in the second half, setting up both Ricardo Pepi’s 63rd minute and David Rodriguez’s 68th minute goals as North Texas took the victory in the first ever meeting between the two sides.

FC Tucson returns home after picking up a 2-2 draw on the road at Orlando City B May 31. Just before halftime, Rafael put Orlando ahead in the 44th minute. Jamael Cox played a ball for Andrew Wheeler-Omiunu to level the score in the 58th minute. Devyn Jambga connected with Terron in the 73rd minute to jump out to a 2-1 lead. That lead would be short lived, however, when former Kickers player Koby Osei-Wusu netted a goal just five minutes later forcing the two sides to share the points.

The Kickers will return to City Stadium next Saturday night, June 15 for Summer Fest, presented by Bounce 2 the Moon. The party starts at 5:30 p.m. with happy hour specials on craft beer, water slides, inflatable, face painting and more! Then, get loud with the Red Army when the Kickers take the field at 7:00 p.m. to take on Chattanooga Red Wolves SC. Tickets and more information can be found at RichmondKickers.com.

Richmond: Defender Braeden Troyer (#31) made his first start in league action last Saturday night against North Texas SC. The veteran defender has made five appearances this season following knee surgery that kept him off the field since last season. Forward Charles Boateng (#77) made his second start up front for the Kickers this season. The Ghanaian made his mark on Kickers fans this season with four goals against Virginia United in the First Round of the 2019 Lamar Hunt U.S. Open Cup. Midfielder Maxi Rodriguez (#21) has one goal in nine matches this season for the Kickers. Named team captain prior to the start of the season, Rodriguez is averaging 82.4 passes per 90 minutes with an accuracy of 81%.

Tucson: Midfielder Devyn Jambga (#16) leads FC Tucson in scoring this season with three goals in eight matches. He has also assisted on one goal while creating five chances. Midfielder Jamael Cox (#11) has seen the field on nine occasions, recording a team-high two assists, picking up his second in the 2-2 draw against Orlando City B. Cox has also scored one goal behind four shots. Defender Kody Wakasa (#33) controls the ball for Tucson, with passing accuracy of nearly 80% after 382 passes. The captain of Tucson, Wakasa recorded 79 passes and had an accuracy of 86.1% in their draw with OCB.