Watch Live from Montverde Academy on WTVR CBS 6.3 and ESPN+ at 7:30 PM 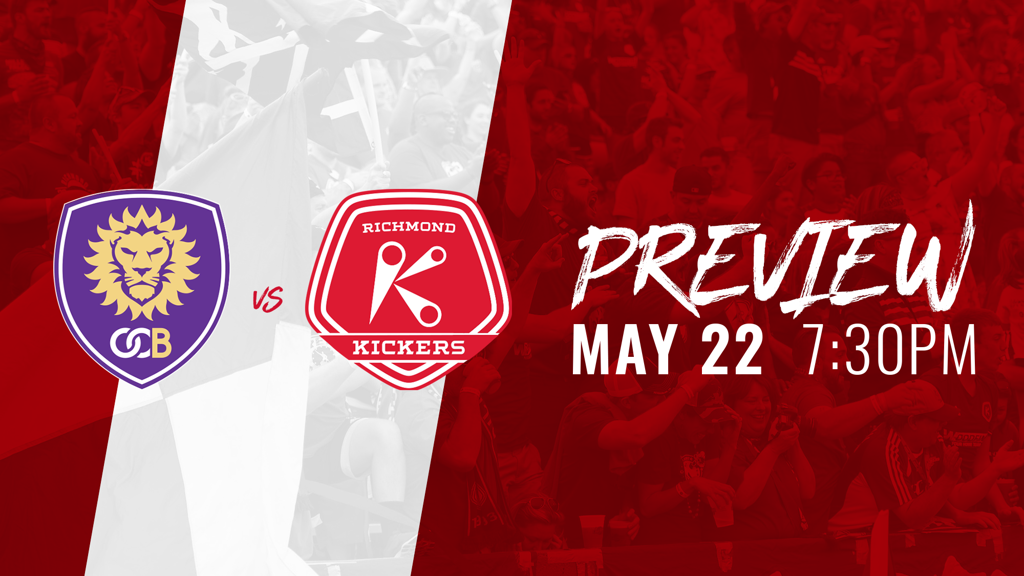 This match will mark the fifth meeting between the two clubs, with the Kickers holding a slight 2-1-1 advantage over OCB.

Prior to Orlando going on hiatus for the 2018 USL Championship season, both teams took a road victory in 2017. Orlando picked up a 1-0 victory August 12 behind a lone goal from Hadji Barry at City Stadium. Richmond returned the favor nearly a month later on September 7, with the Kickers getting a 2-0 win with goals from Mikey Minutillo and Sunny Jane.

Richmond will be looking to get back to winning ways after Saturday night’s 0-1 road loss at Greenville Triumph SC. Three minutes before halftime, Jake Keegan was able to get a touch on the ball just enough to chip Akira Fitzgerald as he was coming off his line. The Kickers keeper kept Richmond in the match behind a game-high ten saves.

OCB is coming off their first win of the season, taking a 2-0 victory over Toronto FC II Friday night. Orlando jumped ahead in the 42nd minute through a goal from Moises Tablante. Two minutes later, Toronto we’re reduced to ten men after Franco Ramos Mingo was issued a straight red card and the referee awarded a penalty to OCB. Austin Amer stepped up to try and double to lead for Orlando from the spot, as Kevin Silva denied him and made the save. Orlando would finally get the second goal, redeeming themselves from the spot as Thiago Sousa converted a second penalty.

The Kickers get a ten day break before their next match, Saturday, June 1 at 7:00 p.m. at City Stadium when they host North Texas SC. The gates open at 5:30 p.m. for Pride Night, where the players will wear limited edition pregame pride jerseys that will be auctioned off for charity. Plus, there will be drink specials for the first 30 minutes after gates open on craft beer and live music. Tickets are on sale now at RichmondKickers.com.

Richmond: Goalkeeper Akira Fitzgerald (#1) posted ten saves in the Kickers last outing at Greenville. The native of Chiba, Japan is tied for the league lead with four shutouts through eight matches this season. Defender Scott Thomsen (#3) faces his former club, where he spent the 2016 season with OCB. A product of the University of Virginia, Thomsen has made six starts for Richmond and has recorded a team-high 18 interceptions. Midfielder Maxi Rodriguez (#21) continues to control the Kickers midfield, leading the team in passes with 532 this season and averaging 84.1 passes per 90 minutes. Wearing the captain’s armband this season, Rodriguez has one goal in seven matches.

Orlando: A familiar face to Kickers fans, Koby Osei-Wusu (#8) leads OCB with two goals in eight appearances this season. The George Washington University product made 17 appearances with the Kickers in his rookie season in 2018, scoring one goal in the U.S. Open Cup. Goalkeeper Juliano Chade (#1) has two clean sheets in six matches this season. Chade grew up in the Brazil youth national team system, including the 2015 FIFA U-17 World Cup. Forward Moises Tablante (#24) scored the first goal Friday night to lead OCB to their first victory of the season. Born in Venezuela, Tablante signed an academy contract after last playing with the Orlando City U19 Academy team.