Kickers Get Upended in Greenville 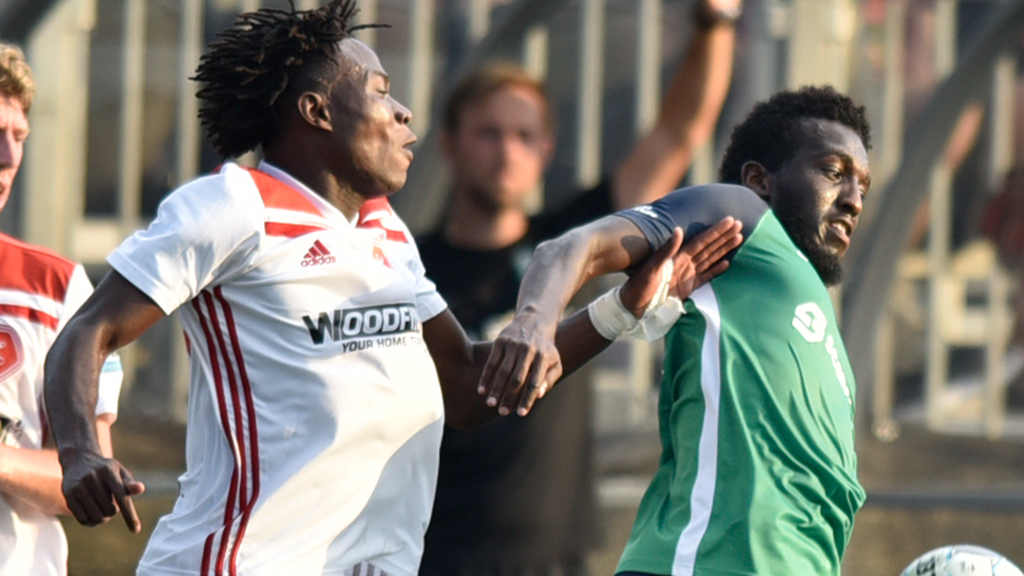 GREENVILLE, S.C. — (Saturday, May 18, 2019) — The Richmond Kickers (3-3-2) could not come back from a first half goal to fall on the road to Greenville Triumph SC (3-3-2) at Legacy Early College Saturday night. Jake Keegan scored the lone goal for Greenville three minutes before halftime.

Four minutes into the match, Greenville nearly slipped through for the opener. Aaron Walker faked a shot from outside the Richmond box, instead electing to play the ball through for Jake Keegan. He went for the cross in front of the goal, as Maxi Rodriguez was there for the block.

Richmond had a chance to go up in the 11th minute. Joe Gallardo stole the ball off the foot of Walker and took the ball out to the left side. Josh Hughes made a near post run as Gallardo played in the cross. Hughes tried the back heel, as the shot was blocked by Greenville and cleared out.

The Kickers defense worked as a unit to keep Greenville off the board ten minutes later. Cole Selier played the ball through as Carlos Gómez met the ball to try for a cross. Wahab Ackwei was there to block the cross and tried to clear the ball. Later, Jake Keegan curled in a shot towards the far post from the left side of the pitch. Fitzgerald stretched to punch the ball away from danger.

Dennis Chin looked to set up a chance for Richmond in the 30th minute. Josh Hughes won the ball in the air to get the ball to the feet of Joe Gallardo out to the left flank. Unable to get the cross in, Gallardo laid the ball back for Chin. The Jamaican chipped the ball in trying to pick out Daniel Jackson charging towards goal. Dallas Jaye came off his line to make the stop before it reached Jackson.

A massive save from Akira Fitzgerald kept Triumph SC off the scoresheet in the 32nd minute. Tyler Polak won the ball in the midfield and played it to Omar Mohammed to his left. Mohammed launched a shot on frame, as the Kickers keeper was there to punch it away.

Greenville broke the deadlock in the 42nd minute. Jake Keegan and Wahab Ackwei fought for a ball just outside the Richmond box, with Ackwei getting a touch on the ball trying to head the ball back for Fitzgerald coming off his line. Ackwei tried to shield Keegan from the ball, as the Greenville midfielder got enough of a touch on the ball to chip it over Fitzgerald for the opener.

Just before the halftime whistle, Mutaya Mwape had a chance to level the game. Maxi Rodriguez took control of the ball just inside the Greenville end. He played the ball out wide for Mwape on the right wing, cutting back inside and went for the near post shot. Dallas Jaye came up with the save as the whistle blew to end the half.

Five minutes into the second half, Daniel Jackson had a go at goal. Maxi Rodriguez sent a ball over the top for Jackson. The forward had enough of an angle to go for the shot, sending it across the frame and out for a goal kick.

Triumph SC was denied a second goal in the 52nd minute. Tyler Polak sent the ball ahead for Cole Seiler to get a touch up the field for Jake Keegan. He squared a pass for Omar Mohammed making a run on goal. Mohammed went for the shot as Fitzgerald came sliding in to make the save.

Richmond came close to getting back into the match in the 56th minute. Conor Shanosky went for the long ball up the left flank for Joe Gallardo. The Kickers forward laid the ball off for Daniel Jackson going for a shot that deflected off the Triumph goalkeeper.

A point blank shot from Greenville was stopped by the Richmond keeper in the 79th minute. Off a corner kick from Omar Mohammed, the ball pinged around inside the box, finally reaching Cole Seiler in space at the back post. He let a shot rip from close range that was denied by Akira Fitzgerald.

The Kickers will conclude their road trip Wednesday night as they take their first trip to Orlando City B since the 2017 season. Kickoff is set for 7:30 p.m. and will be available live on WTVR CBS 6.3 (Comcast 206, Verizon FiOS 466) as well as streaming online through ESPN+. Stay up to date on all of the Kickers news at RichmondKickers.com.