Watch Live from WakeMed Soccer Park on ESPN+ at 7:00 PM 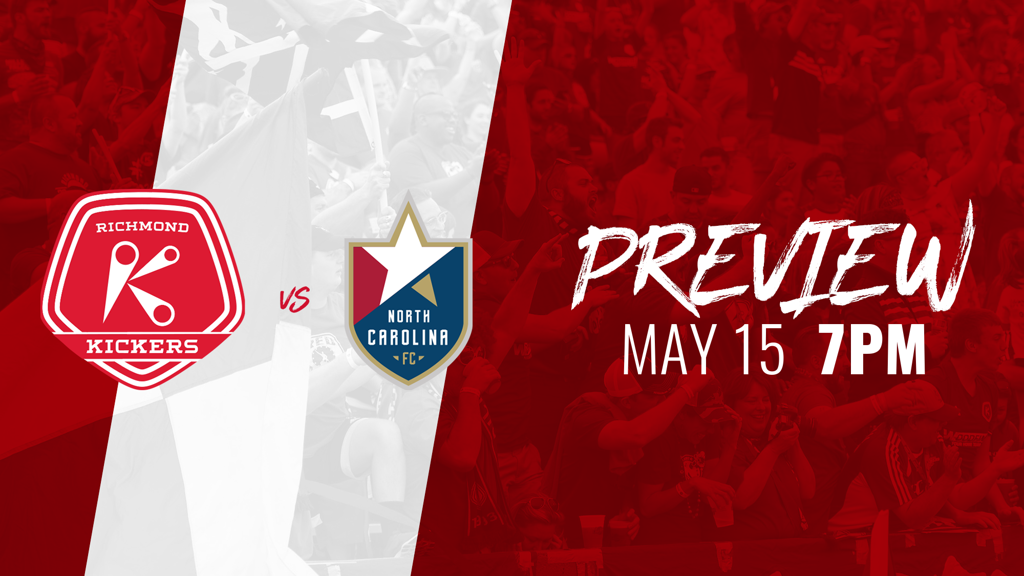 RICHMOND, Va. – (Tuesday, May 14, 2019) – The Richmond Kickers travel to Cary, N.C. for the Second Round of the 2019 Lamar Hunt U.S. Open Cup Wednesday to take on old USL Championship rivals North Carolina FC. This match, along with the entire tournament, will be available to stream online on ESPN+.

The Kickers and North Carolina FC have some history as the two are set to meet in the Open Cup, as recent as 2018, with the record in all-time meetings being 3-4-0 in favor of NCFC. During the 2018 USL Championship season, NCFC got the best of the Kickers on two of the three meetings.

The first meeting came on March 31, with Richmond picking up a 2-1 victory. Goals from Yudai Imura and Raul Gonzalez cancelled out a first half Daniel Rios goal. NCFC crashed the debut of David Bulow as Kickers head coach, taking all three points at City Stadium. Heviel Cordovés found the back of the net after just four minutes. Three second half goals from an own goal, Austin da Luz and Donovan Ewolo sealed the win for NCFC. The final match between the two clubs was at WakeMed Soccer Park, as NCFC came from being down 1-2 at halftime to get the 3-2 win at home.

Richmond closed out a four match home stand in all competitions, extending their unbeaten streak to five matches, most recently a 2-0 victory Saturday night over FC Tucson in USL League One action. Joe Gallardo scored his fourth goal of the season after 83 minutes. Deep into stoppage time time, Mutaya Mwape doubled the Richmond lead, ensuring all three points at City Stadium.

NCFC come into this match on the heels of a two match winless streak, last taking a 1-2 road loss at Ottawa Fury FC Sunday afternoon. Mour Samb put Ottawa ahead four minutes before halftime. Steven Miller got NCFC back into the match in the 66th minute to tie things up. Four minutes later Kévin Oliveira got the game winner to down North Carolina on the road.

The Kickers get right back to USL League One play Saturday night as they travel down to face Greenville Triumph SC at Legacy Early College for a 7:00 p.m. kickoff. This match will be available to stream live on ESPN+ and shown locally on WTVR CBS 6.3 (Comcast 206, Verizon FiOS 466). Stay up to date with the Kickers at RichmondKickers.com.

Richmond: Midfielder Charles Boateng (#77) lit up the First Round of the 2019 Lamar Hunt U.S. Open Cup, netting four goals to lead all scorers in the round. The Ghanian has made three appearances, including one start this season in league play. Defender Eli Lockaby (#17) scored his first professional goal in the First Round of the tournament, plus adding an assist. The VCU product is in his first professional season, making five starts in five appearances for Richmond. Goalkeeper Akira Fitzgerald (#1) recorded his fourth shutout of the season Saturday night against Tucson. A veteran at the USL Championship level, Fitzgerald has played every minute for the Kickers this season, posting six saves.

NCFC: Forward Marios Lomis (#9) leads all scorers for NCFC, netting six goals in nine matches and adding one assist.  The native of the Netherlands is in his second season with North Carolina, making 32 appearances over the two seasons. Defender Steven Miller (#31) has two goals and a team-high three assists over nine matches. Miller is in his fourth season with NCFC, making over 70 appearances for the club. Midfielder Austin da Luz (#6) has played in five matches this season, scoring on one occasion. A veteran of soccer in the United States, da Luz joined NCFC in 2012 where he has gone on to make over 100 appearances after stints in the USL Championship and Major League Soccer.