Kickers will Host Virginia United at City Stadium May 7 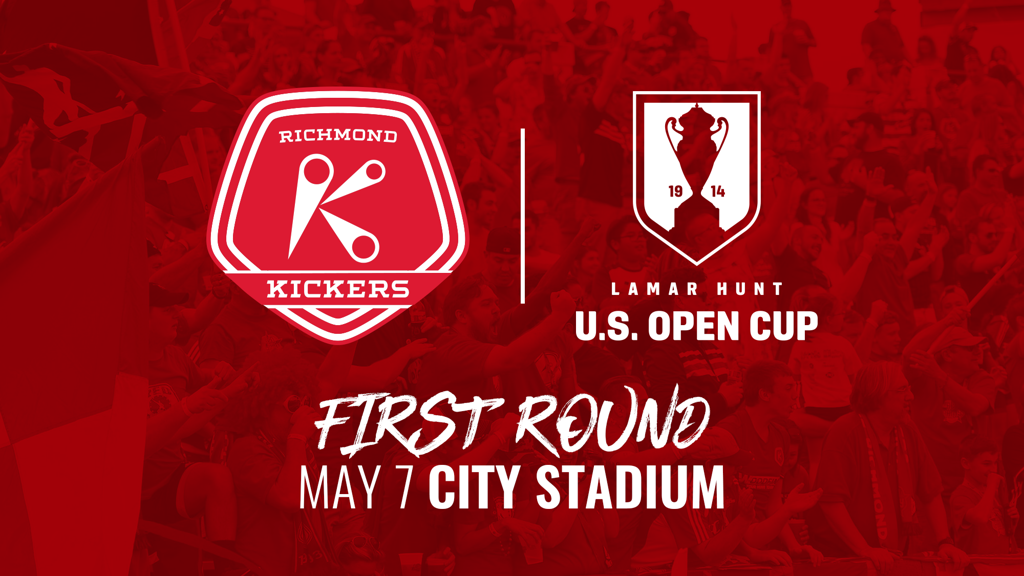 RICHMOND, Va. – (Wednesday, April 10, 2019) – U.S. Soccer announced on Tuesday the pairings for the First Round of the 2019 Lamar Hunt U.S. Open Cup. The 1995 Champions Richmond Kickers will host Virginia United at City Stadium Tuesday, May 7 at 7:00 p.m. Tickets are available now starting at $9 at RichmondKickers.com. 2019 Season Ticket holders will receive an email with a ticket for this match. Parking at City Stadium for this match will be free.

The Kickers made history with their remarkable run to the semifinals in 2011. Becoming the first lower division team to defeat back-to-back MLS teams on the road, the Kickers ejected the Columbus Crew in  the third round before handing Sporting Kansas City their first-ever loss at Children’s Mercy Park in the quarterfinals. Advancing to the semifinals for the second time in franchise history, the Kickers narrowly missed the Championship berth, conceding a 2-1 loss to the Chicago Fire last August.

The First Round will commence May 7-8 and consist of six Division III (USL League One) pro clubs and 32 Open Division teams (USL League Two, National Premier Soccer League [NPSL], local qualifiers) in head-to-head, single-elimination competition. Two of the 19 matches are between teams from the same qualifying pool under a First Round provision that allows avoidance of extensive travel at this stage of the tournament.

The Second Round follows on May 14-15 and introduces 25 Division II (USL Championship) professional sides. Division I Major League Soccer teams enter in the Fourth Round on June 12.

Home teams for each round are determined by a random selection process among those clubs that have applied to host and whose venues meet the minimum tournament requirements.

Every game of the 2019 U.S. Open Cup, including those in the First and Second Rounds, will be available for fans to watch on ESPN+.

This year's winning team will receive $300,000, a berth in the 2020 Concacaf Champions League and have its name engraved on the historic Dewar Challenge Trophy, one of the oldest nationally contested trophies in American team sports. The runner-up will earn $100,000, while the team that advances the furthest from each lower division will take home a $25,000 cash prize.

The Houston Dynamo is the defending U.S. Open Cup champion, having earned the club’s first tournament title with a 3-0 victory against the Philadelphia Union on Sept. 26, 2018 at BBVA Compass Stadium in Houston.

The Lamar Hunt U.S. Open Cup, recognized as U.S. Soccer's National Championship, is an annual competition open to all amateur and professional soccer teams affiliated with U.S. Soccer. The tournament has crowned a champion for 105 consecutive years dating from 1914. In 1999, the competition was renamed to honor American soccer pioneer Lamar Hunt.

* Any game from the Fourth Round through to the Semifinal Round where one of the participants has a league game the following Friday will be moved up a day (exception to this occurs when the team's opponent is scheduled for a league game the preceding Sunday; in this case, the provisions in the 2019 Lamar Hunt U.S. Open Cup Handbook to determine the match date will prevail). In addition, any game chosen by U.S. Soccer to be broadcast nationally in any round is subject to being moved up a day. The Commissioner has the authority to set outside of the confirmed schedule the date for any match if such a change is in the best interests of the tournament.